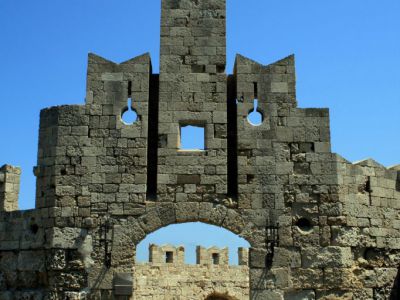 Located in the north-eastern corner of Rhodes' Old Town, Saint Paul's Gate once served as an entry point to the city from the harbour of Mandraki and the De Naillac Pier.

The bastion protecting the gate is an eloquent token of masterful construction technique and a point of reference for fortification works specialists: 12 cannon holes meant to cover a wide range between the two harbours and the mole of Agios Nikolaos (St. Nicolas). A common feature among this gate, the Agios Athanasios (St. Athanasius) Gate and the d’Amboise Gate was the drawbridge module, estimated to have operated through a system of beams and counter-weights, the presence of which is suggested by the vertical slots into the external wall, where the beams of the drawbridge module must have been affixed.

A semi-cylindrical tower in the inner part of wall bears a marble sculpture of the coat of arms of the House of Grand Master d’Aubusson (1476-1503), right next to those of the Hospitallers Order and Pope Sixtus IV. Right below the coats of arms there is an effigy of Paul the Apostle and the inscription, in Gothic characters, of “Sanctus Paul”. The presence of such blazons puts the time of completion of this part of the fortifications at around 1477, as part of a grander project set to restore the northern walls, commissioned by Grand Master d’Aubusson.

During World War Two, St. Paul’s Gate was hit heavily and almost fell. It was rebuilt early in the 1950s.
Image Courtesy of Wikimedia and Karelj.