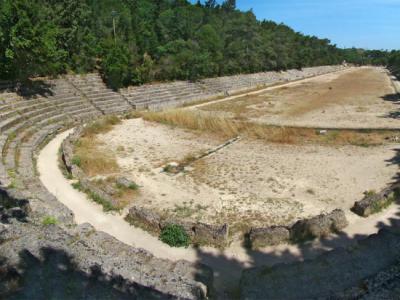 The Rhodes Stadium is located to the west of Rhodes Town on Monte Smith Hill and was constructed in the 2nd century B.C. Under the Hellenistic influence on Rhodes, the locals took on the Greek gods and there are the remains of the temples of Zeus, Athena, Apollo and Helios above the ancient Stadium of Rhodes.

Originally the Stadium was built to be used in events relating to the Cult of Apollo and, it is thought, for the Rhodian School of Rhetoric. Today, the Stadium has been restored and is sometimes used for musical or theatrical performances. It seats 800 spectators and measures 200 meters by 35 meters.

The Stadium was of sacred importance to the ancient Rhodians. It was believed that when Zeus divided up the lands among the gods, Helios, the god of Sun, was absent. When he returned Zeus decided to offer him the first land that sprung up from the sea. Just as he made this promise to Helios, a lush green island emerged from the waters and was bathed in light. Helios, therefore made the patron god of Rhodes. As you stroll around the Stadium and Acropolis you can imagine ancient Rhodians performing their dramas and from the top of the Stadium. The view of Rhodes Town from the Stadium is impressive.
Image Courtesy of Wikimedia and Tango7174.