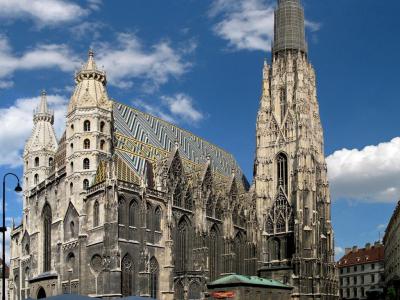 With its intricately patterned tiled roof, the imposing Gothic cathedral of St. Stephen's (Stephansdom) is a prime landmark inside Vienna's old city center, having stood watch over the place for nearly 700 years. Its distinctive south tower rises to an impressive 445 feet and previously has served as the main observation and command post for the city's walled defense, for which purpose it even contained an apartment for watchmen who, until 1955, manned the tower at night and rang the bells if a fire was spotted. There was to be a twin north tower, but for several reasons, it ended up being just half the size and of a different design.

The views from the Watch Room, at the top, are surely worth climbing the 343 steps, otherwise you can take a lift up to a viewing platform on the shorter tower, home to the massive Pummerin ("Boomer") Bell – the largest in Austria, originally cast from melted-down cannons abandoned by the Turks while fleeing Vienna in 1683.

High points of the interior are the gorgeous vaulting of the Albertine Chapel, the stone pulpit (a masterwork of late Gothic sculpture), canopies or baldachins over many of the side altars, and a most spectacular Renaissance work – Friedrich III's tomb. You also won't want to miss the 14th century catacombs and the treasury where some of the cathedral's most valuable objects are displayed. Some of them can only be seen on a guided tour, such as a red marble sepulcher sculpted in 1467-1513, the 16th-century pulpit, a Gothic winged altar from the 1440s, and the tomb of Prince Eugene of Savoy dated 1754.

Visit St. Stephen's Cathedral and you'll be standing in the same church in which Joseph Haydn once sang as a choir boy until his voice broke, and where Johann Strauss married both of his wives, Henrietta Treffz and Angelika Dittrich. A memorial tablet gives a detailed account of Wolfgang Amadeus Mozart's relationship with the cathedral, including that of him being appointed an adjunct music director here shortly before his death. This was his parish church when he lived at the Figaro House and he was married here; two of his children were also baptized at St. Stephen's, and his funeral was held in the Chapel of the Cross inside.

Why You Should Visit:
While incredible architecture is rather commonplace in Vienna, this majestic Roman-Gothic masterpiece is absolutely unmistakable and not to be missed.

Tip:
Be sure to make a loop around the structure as there are many interesting details still visible on the outside walls.