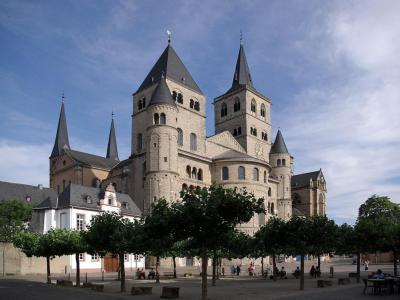 The Cathedral of Saint Peter is the oldest cathedral in the country. The edifice is notable for its extremely long life span under multiple different eras each contributing some elements to its design, including the center of the main chapel being made of Roman brick laid under the direction of Saint Helen, resulting in a cathedral added on to gradually rather than rebuilt in different eras. Its dimensions, 112.5 by 41 m, make it the largest church structure in Trier. Since 1986 it has been on the UNESCO list of World Heritage Sites.

The West front in five symmetrical sections remains typical of Romanesque architecture under the Salian emperors. The West end choir, with its apsidal semi-cylinder expressed on the exterior façade, was completed in 1196. The interior is of three Romanesque naves with Gothic vaulting, and a Baroque chapel for the relic of the Seamless robe of Jesus, recovered from the interior of the high altar in 1512, complete the interior.

The Latin inscription above the clock on the tower reads "NESCITIS QVA HORA DOMINVS VENIET" ("You do not know what time the Lord is coming").
Image by Stefan Kühn on Wikimedia under Creative Commons License.
Sight description based on wikipedia