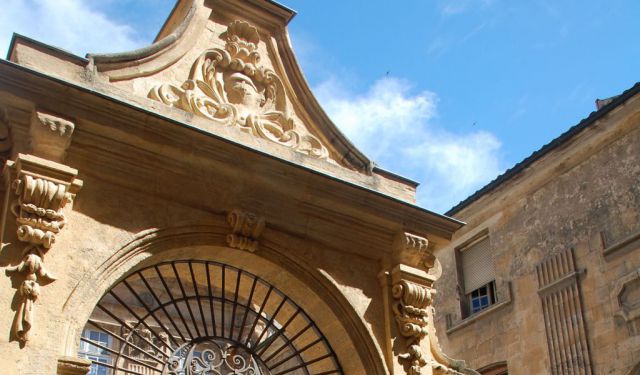 Aix for the Museum Lover, Aix-en-Provence, France (A)

The City of Aix-en-Provence has well-preserved both its historic links and its love of art through several museums, most of them located in the city center within easy walking distance of each other. This tour brings you to Aix's cultural treasures, whether they be dinosaur eggs or still-life paintings, as you wander the city streets. (Estimated tour duration of eight hours includes visits to museum exhibits).
This article is featured in the app "GPSmyCity: Walks in 1K+ Cities" on iTunes App Store and Google Play. You can download the app to your mobile device to read the article offline and create a self-guided walking tour to visit the attractions featured in this article. The app turns your mobile device into a personal tour guide and it works offline, so no data plan is needed when traveling abroad.

Create Your Own Self-Guided Walks in Aix-en-Provence
Guide Name: Aix for the Museum Lover
Guide Location: France » Aix-en-Provence
Guide Type: Self-guided Walking Tour (Article (A))
# of Attractions: 7
Tour Duration: 8.0 Hour(s)
Travel Distance: 2.7 Km or 1.7 Miles
Author: Rachel Holly
Author Bio: Before moving to France in 2007, Rachel - a native Texan - worked in international media sales, traveling the globe to publish economic business reports. Today she is an independent contractor based in Aix-en-Provence, where she lives with her husband.
Sight(s) Featured in This Guide:
1

The former priory of the Knights of Malta, next door to L'Eglise de St Jean de Malte, is now the Granet Museum, housing more than 600 works of European artists in painting and sculpture from the 17th to the 20th Centuries.

The museum offers five permanent collections. Despite recent renovations, the exhibits at times seem to be crowded together; many of the walls are covered with paintings, so be sure to give yourself enough time to appreciate the pieces individually.

One collection is dedicated to French, Italian, and Nordic painters from the 14th to 19th Centuries. Works from artists such as Rubens, Rembrandt, and Rigaud draw upon a common theme of the stages of man's life.

Another collection focuses on 19th Century artwork from Constantin, Ingres, and Granet, the museum's namesake.

The sculpture gallery includes works from Aix artists such as Chastel, Ramos, and Ferrat, as well as several busts of some of the region's most well-known residents.

The museum pays tribute to the most famous artist from Aix, Paul Cézanne, with nine of his lesser-known works which are permanently held here, along with several drawings and sketches.

And finally a separate exhibit is dedicated primarily to 20th Century European artists, "from Cezanne to Giacometti," including Picasso, Leger, and Morandi.

The Arbaud Museum can be found in the heart of the Mazarin district, just north of le Place de Quatre Dauphins. Housed in the Hôtel d'Arbaud, one of the finest residences of the district, it contains a rich assortment of paintings as well as a sizable provençal pottery collection. Additionally the museum holds a large library of books and more than 1600 manuscripts.

The museum is the former home of Paul Arbaud, a scholar from the 19th Century and the benefactor for whom the museum is named. Recognizing the importance of his illustrious collection to Provence, he donated it and his house to the Académie d'Aix upon his death.
3

The Museum of Natural History was established in Aix in 1838 by geologist Henri Coquand. In 1954 it was relocated next to Place d'Albertas in the Old Town of Aix-en-Provence, within Hôtel Boyer d'Eguilles. This building was one of Aix's most distinguished mansions, constructed in 1639.

Here almost 300,000 specimens make up the museum's collections, spread across three rooms. The first focuses on paleontology, and a highlight of the museum is a collection of dinosaur eggs and fossils excavated from the area surrounding nearby Mount St. Victoire. In fact, it's considered one of the best collections in France.

The second room is dedicated to anthropology, displaying artifacts which illustrate the stages of man's evolution.

The last section is a room dedicated to biodiversity, a recent addition created in two thousand nine.

As can be expected, the museum also hosts four temporary exhibits throughout the year on a range of subjects.
4

Estienne de Saint-Jean Museum, formerly known as the Museum of Old Aix (Musée du Vieil Aix), pays tribute to the traditional art of Provence and the artistic heritage of the region. On display you'll find handcrafted religious objects, pottery, porcelain, figurines, furniture, costumes, and an impressive assortment of theatrical wooden puppets. All of these collections help preserve Aix's folk traditions, allowing visitors to appreciate the history and culture of the region.

The museum resides inside a hôtel particular, built in the late 17th century and retaining much of its original interior decor. It officially became Aix's history museum in 1932 with its collections generously donated by Marie d'Estienne de Saint-Jean.
5

Established in 1909, the Museum of Tapestries is located in the former Palace of the Archbishop, surrounding a former carriage courtyard which is now La Place des Martyrs de la Résistance.

The palace apartments divide the tapestries into three main collections. The first is the story of Don Quixote (1735-1745) illustrating a style which uses large pictorial characters. The second is called "the Grotesque," which displays the theatrical use of tapestries in the 17th Century. The third collection is called "Russian games" inspired by the artist's stay in Russia in the 18th Century. A separate section displays a variety of contemporary tapestries, and the museum hosts modern textile exhibits throughout the year.
6

Just outside of the city center, the Pavillon de Vendôme houses exhibits of contemporary art and photography, while the building itself is enriched with local history.

Like many other Aix museums, it used to be a private mansion. This one was built in 1665 by architect Antoine Matisse for Louis de Mercosur, Duke of Vendôme, who became governor of Provence in 1652. According to local legend, the duke was inspired to build it for his mistress, so that they would have a place to secretly meet at night. Since the duke's death, the mansion has passed to several owners, usually as a residence for prominent Aix noblemen, but also once as a studio for painter Jean-Baptiste van Loo, and after the revolution it became a girls' boarding school run by the Sisters of the Sacred Heart.

In 1906 art enthusiast Henry Dobler bought the property, and put it through extensive renovations to restore the building to its original architecture and the garden to its original landscape. It was then given to the City of Aix-en-Provence and since 1990 it has been the home to a collection of contemporary art.
7

The Cézanne Workshop is a must-see for any admirer of Paul Cézanne. Aix's most famous artist spent the last years of his life attentively painting his final works in this studio overlooking the town. Instead of displaying his works, the Atelier Cézanne instead hosts a collection of his personal possessions and furniture as well as the still life objects of some of his paintings, arranged and restored to give the visitor a sense of the painter's daily work life.

Cézanne bought the cottage in 1901, desiring the natural light, silence, and beauty of the surrounding landscape. Although much of the original farmland has since been developed, a shady garden still remains for visitors to wander through.