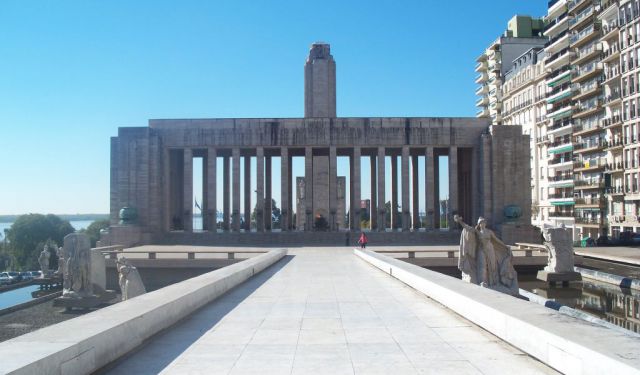 Rosario is famous for its´ National Flag Monument; however, it is also a cultural epic-center and the birth place of Ernesto “Che” Guevara. Located on the banks of the Parana River, it provides tourists with an alternative to the hustle and bustle of Buenos Aires. If you want to enjoy local culture and style take this walking tour through Rosario’s coastal promenade.
This article is featured in the app "GPSmyCity: Walks in 1K+ Cities" on iTunes App Store and Google Play. You can download the app to your mobile device to read the article offline and create a self-guided walking tour to visit the attractions featured in this article. The app turns your mobile device into a personal tour guide and it works offline, so no data plan is needed when traveling abroad.

Create Your Own Self-Guided Walks in Rosario
Guide Name: Rosario Cultural Walk
Guide Location: Argentina » Rosario
Guide Type: Self-guided Walking Tour (Article (A))
# of Attractions: 6
Tour Duration: 2.0 Hour(s)
Travel Distance: 3.1 Km or 1.9 Miles
Author: Claudia Nelson
Author Bio: Claudia Nelson is an expatriate who has lived in Argentina for several years. She enjoys discovering off the beaten path locations as well as writing articles for the frugal traveler. Author of “Argentina: Inside Out”, she is considered an expert on Argentina or retiring abroad.
Sight(s) Featured in This Guide:
1

We begin the tour by paying tribute to Ernesto “Che” Guevara who was born in Rosario, Santa Fe on the 14th of May in 1928. His birth home still stands, located at Entre Rios 480 in the heart of downtown Rosario. Unfortunately, it is a private residence; not open to the public. Luckily, the building is protected under the city’s patrimony law this ensures that it will continue to be preserved in its original state for future generations. The landmark can be a bit tricky to find if you are not searching for it. Just look for the red metal sign located right in front of the building.
2

Located two blocks from his birth place, at the intersection of Mitre and Tucuman; we find the only real tribute in the downtown area to the legendary figure Ernesto “Che” Guevara. Founded during the military rule, it was known as la Plaza del Mercado. Once the democratic government was established it became the Plaza de Cooperacion. However, the people would have the final word, as they christened it La Plaza del Che. A famous Che mural elaborated by a local artist stands at the center of the modest Plaza. You will notice that another red metal sign clearly indicates the landmark
3

A few blocks down from Che’s Plaza, as we walk towards the river, near the corner of Mitre and Salta, we arrive to Plaza Guernica. The plaza like the famous Picasso painting is dedicated to the citizens of Guernica, Spain. The small town that had been completely annihilated by the Nazis during an air-raid bombing, on April 26 in 1937. To some it stands as a reminder of the evil that men do, while others prefer to view it as a symbol for peace. The large name plaque is written in both languages; Spanish and the Spanish dialect spoken in Guernica, Spain. The plaza was constructed with the help of a Spaniard peace organization.
4

Parque España is situated on the shore of the Paraná River. It was built through mutual collaboration between the City of Rosario and the Spanish government. Locals enjoy the coastal promenade as well as the cultural expositions and open air concerts. From the park, you can catch the city sight-seeing ferry or take a boat across to the neighboring islands. Inside the park, the Cultural Complex is open Monday through Friday from 9 a.m. to 7 p.m. Art Galleries operate Tuesday through Sunday from 5 p.m. to 9 p.m. Well-known for its contemporary art displays, the complex also houses a 500 seat theatre, a large conference room, three art galleries, and a video library. There is something for everyone. Small bars and restaurants are located both in and around the park. For those who wish to enjoy a more tranquil setting, try visiting the park during siesta hours. Don’t be surprised to find locals taking a nap on the grass, it’s a tradition. If you want to mingle with locals and get a taste of the culture, this is the place.
5

Formerly, a private residence, the museum was founded on June 8th, 1968. Both the mansion and its entire content were a donation from the widow of Dr. Otilo Estevez, in honor of her late husband. The museum operates Wednesday through Friday from 3 p.m. to 8 p.m. and on weekends from 10 a.m. to 8 p.m., the building houses various paintings, sculptures, crystals, furniture and potteries from the nineteen hundreds. The City of Rosario runs and maintains the historic cultural compound; local patrimony law also ensures its preservation. The estate contains eight main rooms, each with a distinct collection. Self-guided audio tours are available to the public during hours of operation. Don’t miss out on the opportunity to take a journey back through time and to sample the lavished lifestyle of oligarchy.
6

Rosario is most popular for its Monument to the Flag. It was officially opened on June 20th, 1957, 95 years after breaking ground on the project. The structure is constructed from unpolished travertine marble brought in from the province of San Juan. The monument is divided into three parts; the central tower which represents the nation’s self-propelled triumph, the flag gallery in honor of the different countries of America, and the civic staircase which joins both architectural structures. There are twenty-five distinctive architectural themes; nineteen surrounding the tower and six line the flag gallery and mast. You will also find five huge bronze statues, two large sculptures, two stone crosses, several marble and bronze bas-reliefs, as well as nineteen Argentine shields one for each of the provinces. Throughout the 95 year construction, many different artists and architects worked on the colossal monument. Some speculate that numerous freemason and illuminati symbols can be found throughout the national landmark. During the summer months, the city puts on free musicals and concerts for locals to attend at the monument.