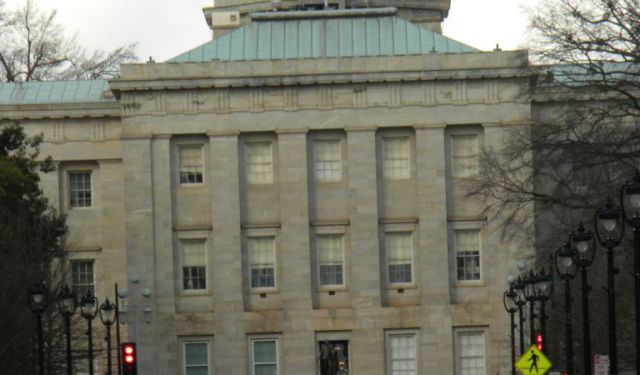 Until very recently, Raleigh was known as a sleepy, downright dreary state capital. Well, forget that image. The city has exploded into a lively family destination. Dinosaur bones, historical sites, and high-energy children’s entertainment are all within steps of each other. Not to mention “Hot Now” Krispy Kreme donuts. Lace up your walking shoes, grab this guide, and you’re ready for a capital adventure.
This article is featured in the app "GPSmyCity: Walks in 1K+ Cities" on iTunes App Store and Google Play. You can download the app to your mobile device to read the article offline and create a self-guided walking tour to visit the attractions featured in this article. The app turns your mobile device into a personal tour guide and it works offline, so no data plan is needed when traveling abroad.

The Mordecai [pronounced MOR-deh-key] House was built in 1785 by Joel Lane, the man who sold 1,000 acres to the state to be the site of the permanent capital city. Lane’s family and descendants lived in the house for almost 200 years, until the site was deeded over to the city of Raleigh for a historic park. The Lane house became the Mordecai House in 1817, when Joel Lane’s eldest daughter married Moses Mordecai. By the time of the Civil War, the Mordecai farm had grown into a 5,000-acre plantation with more than 100 slaves. When slavery ended, the family began selling off pieces of the property. You can wander around this little gem of a park on your own or pay a few bucks for one of the hourly tours. The park includes a few buildings that were not originally on the site – President Andrew Johnson’s birthplace, a little chapel called St. Mark’s, and a kitchen where slaves cooked for the masters in the Big House. Mordecai Park is also where you can catch the Raleigh Trolley for an hourlong tour of downtown. The trolley tours run Saturdays, March through December; the fare is $10 for adults. The park grounds are open every day, sun-up to sundown. www.raleighnc.gov/mordecai
2

What you want is to get here when the “Hot Now” sign is lit. That’s when the donuts are coming off the conveyor belt with their fresh crispy-creamy coat of sugary glaze. But don’t stress – the donuts sell so fast here that they’re always fresh, even if they aren’t actually made while you’re standing in line at the counter. The store recently got a good spiffing up, with tables and restrooms added. And there’s a fine view from anywhere in the place of the kitchen where all those donuts are made, assembly-line style. The coffee is pretty good, too, and it’s served very hot.
3

Look for the ComedyWorx building at Peace and West streets. It’s an improv theater by night, but two mornings a week, it becomes the venue for puppet shows for the short-attention-span set. That would be kids ages 2 to 7. This isn’t the kind of theater where you have to sit quietly and watch, no indeed. With a bit of costuming, the kids get to be actors or puppeteers as they help create a wacky show with themselves as the stars. Music, movement, and guest puppets combine to keep those little minds enraptured. Each show lasts a fast-paced 40 minutes. Admission is $4. Wednesdays and Thursdays, 10 a.m. and 11 a.m. www.carolinapuppets.com/kazoom
4

Spot this museum by the Acrocanthosaurus skeleton in the glass-walled tower, three stories above the street. That skeleton is the most complete specimen of its kind on display anywhere in the world. North Carolina is a land of diverse geology and wildlife, and this museum showcases it in nine colorful and kid-friendly exhibit halls. State-of-the-art “bioramas” feature live animals and plants. An expansive “Mountains to the Sea” exhibit takes you through the state’s spectrum of habitats from the western mountains into the Piedmont and down to the Coastal Plain. Here’s an interesting nugget for those who like jewelry: North Carolina is the only state where rubies, emeralds, sapphires and diamonds – the four most valuable gems – have been found. A Discovery Room on the second floor has plenty of touchy-feely-smelly animals, fossils, and other natural objects to engage little kids. Keep going up and you’ll find the third-floor exhibits on treetop habitats and prehistoric beasts. Finally, on the top floor, meet live arthropods and butterflies, and then treat yourself to lunch at the Acro Café. Free admission, open every day. www.naturalsciences.org
5

This museum traces the area’s history back about 10,000 years. That’s when Native Americans first established permanent settlements in what is now North Carolina. Since its founding in 1902, the state’s history museum has grown and grown, moving several times during the 20th Century. In 1992, the museum got its own home, a spacious and well-equipped $29 million building nestled in the cultural center between the Capitol and the Legislative Building. Lively exhibits explore military, sports, education, agricultural history and more. North Carolina was home to some “firsts” that may surprise you. We all know about the Wright Brothers and the first powered airplane flight. The state was also the site of the nation’s first gold rush (1799, in Cabarrus County), the first state university in the U.S., and the first English settlement in the Americas. Within the museum is the North Carolina Sports Hall of Fame, with items donated by the state’s many sports heroes, including Michael Jordan, Richard Petty, Jim Valvano, Meadowlark Lemon, and Kay Yow. You’ll also find the Capital Area Visitor Services information center in the lobby of the history museum. Free admission, open every day. www.ncmuseumofhistory.org
6

Throughout the Colonial period, North Carolina’s government migrated around the state. Finally in 1788, a State Convention settled on a spot. It happened that the men who ran things tended to congregate and caucus at a pub in Wake County. The permanent center of state government, it was decided, must be within 10 miles of that pub, known as Isaac Hunter’s Tavern. A two-story brick State House, first used in 1794, was destroyed by fire in 1831. The present State Capitol, built on the same site, opened in 1840. A fine example of Greek Revival architecture, the Capitol is built in the shape of a cross and has a central domed rotunda. The outside walls are made of granite that was quarried on the southeastern side of town. Dominating the rotunda is a quirky statue of George Washington as his contemporaries probably never knew him. Sculptor Antonio Canova, commissioned to create the piece for the original State House, thought the best way to honor Washington was to depict him like a Roman general – tunic, body armor, sandals and all. The caped Washington sits writing on a tablet … in Italian. Canova’s sculpture was destroyed in the 1831 fire; the copy on display now was made in 1970. You can drop in, pick up a leaflet, and take yourself on a tour. If you show up during the fall or spring, when busloads of students are visiting, tag along with one of the guided student tours. Free admission, open every day. www.nchistoricsites.org/capitol
7

These might just provide a whole day of entertainment by themselves. Some years back, Raleigh opened a children’s museum to great fanfare. But kids found it boring. A few blocks away was a privately owned indoor play facility called Playspace that kids loved. Someone got the bright idea to combine the two, and in 1997 Marbles opened as a kids museum devoted to the power of play. It’s been a smashing success. There’s an exhibit that lets kids try running a town, another where they can go wild with water – and, yes, get wet. They can try their hands at building, painting, sculpting, even managing money, all in good fun. The gift shop next to the lobby has an excellent stock of toys and games that connect with the museum’s themes. If you feel like sitting for a bit, you can have a larger-than-life experience in the museum’s IMAX theater. Both documentaries and theatrical movies are screened there. It’s the only 3D-capable giant screen in North Carolina. There’s a fee to enter the museum, and it costs extra to get into the IMAX theater. www.marbleskidsmuseum.org
8

This little museum is fairly new, though the city’s history dates back to the early days of the Union. There was no city here in 1792 when the area was chosen as the site for a new state capital. For two centuries after that, Raleigh had no central collection place for the artifacts that told the city’s story. In the 1990s, two local women – Beth Crabtree and Mary Cates – turned dreams and determination into an institution to preserve the capital city’s history. The museum is housed in the historic Briggs Hardware Building, which was Raleigh’s first skyscraper – at a stunning height of four stories. A statue of Sir Walter Raleigh, carved from a single block of wood, greets you just inside. Exhibits trace the city’s civil rights history, the evolution of local news media, and other local lore. A small gift shop features pottery and crafts by local artisans. Free admission, but a donation is suggested. The museum is closed on Sundays and Mondays. www.raleighcitymuseum.org
9

Theater and music are abundant in Raleigh, and the Progress Energy Center is the crowning jewel on that scene. Raleigh Memorial Auditorium, with its 14 stately Doric columns, was originally built in 1932. In the 1990s, other venues were added on the site, expanding the historic civic auditorium into a world-class performing arts center. With its four theaters, the center hosts everything from intimate black-box drama to elaborate touring Broadway shows. Progress Energy Center is home to the Carolina Ballet, North Carolina Symphony, Broadway Series South, and North Carolina Theatre. Out front, on Lichtin Plaza, you’ll often find festivals, concerts, and other community gatherings. Check the center’s website to see what’s on the schedule while you’re in the Raleigh area. www.progressenergycenter.com