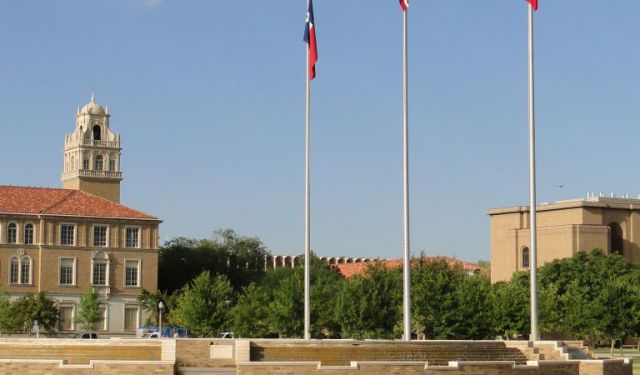 Texas Tech University is where thousands of people from Lubbock and the South Plains area have earned their degrees since 1926. This guide explores historical, architectural, and just darn interesting places to see at Texas Tech. There are several surprises to discover along the way.
This article is featured in the app "GPSmyCity: Walks in 1K+ Cities" on iTunes App Store and Google Play. You can download the app to your mobile device to read the article offline and create a self-guided walking tour to visit the attractions featured in this article. The app turns your mobile device into a personal tour guide and it works offline, so no data plan is needed when traveling abroad.

The 12’ tall granite seal of Texas Tech University is where this walking tour of Texas Tech starts. The symbols on the seal, clockwise from top right, are a Lone Star, representing the state of Texas, an oil lamp representing school and study, a key, representing home, and a book, representing religion. The dots dividing the quadrants are actually cotton bolls, symbolic of the strong cotton farming heritage of the area. The eagle over the crest represents our great nation. This seal has been located here since 1972.

The name Texas Tech University has been in use since 1969. Before that, the school was called Texas Technological College. Approval of this name change took almost the entire decade of the 1960s. I hope you enjoy your tour of Texas Tech. The visitor center is on the north side of the entry drive if you want more information.

The horse and rider statue on the east side of Memorial circle is Will Rogers and his horse, Soapsuds. This statue was donated to the University in 1948 from the Amon G. Carter Foundation. Originally the statue was facing west, allowing the pair to ride into the sunset every evening. However, this pointed Soapsud’s rear towards downtown Lubbock, prompting the statue’s rotation to its current position. The statue’s tail end is now pointed toward Texas A&M University, as a constant reminder of every Red Raider’s opinion of this rival school. On home football game weekends, the entire statue is wrapped in red crepe paper by the Tech spirit group, the Saddle Tramps. This tradition originated in the early 1950s.

The circular field to the west of the Will Rogers statue is Memorial Circle. Originally the geographic center of campus, the Tech War Veterans Association dedicated the circle “to all whose service has brought honor to college and country” in 1948. The national, state, and school colors are flown here daily.

Inside Holden Hall rotunda is the Pioneer Mural, a remnant of the times when the building was the original Museum of Texas Tech University. This fresco painting was created by Peter Hurd, starting in 1952, to depict life on the South Plains between 1890 and 1925. The building is named after William Curry Holden, a historian, professor and dean at Texas Tech University, who was instrumental in improving the University museum.

From the entry, look around Memorial circle. The buildings you see are all excellent examples of the Spanish Renaissance Architecture for which Texas Tech is famous. The administration building was modeled after La Universidad de Alcala, in Madrid, Spain. This style was decided upon by the Board of Directors in 1923. The original buildings were designed by William Ward Warkin. Over the years, elements of this architecture style have been incorporated in new construction.

The masked rider statue is located behind the Frazier Alumni pavilion. The Masked Rider tradition started in 1936 when a student named George Tate led the football team onto the field astride a palomino horse and just as quickly fled the scene of this now famous prank. This became an official tradition at the Gator Bowl in 1954, with rider Joe Kirk Fulton. This statue honors all the masked riders and Red Raiders. Each year a new Masked Rider is selected from the student body. This student attends an average of one function every other day throughout the year, representing Texas Tech in the famous red trimmed black cape, while still completing his or her academic studies.
5

The Student Union Building, which includes eating, entertainment, and retail establishments as well as conference rooms and function space, is literally crawling with art. There are two prominent sculptures on the west side of the building. The human figure made of books is titled Read Reader by Terry Allen. The second sculpture is titled Tornado of Ideas, by Tom Otterness. Look over both these sculptures for the different books titles and placement and take a few minutes to discuss the sculptors’ intent in these choices, as they are both meant to promote discussion between conflicting ideas. The cartoonish figures from Tornado of Ideas can be found throughout the SUB and in New York City’s subway system at the 14th St stop of the ACE and L lines. Search for the sculpture of the Masked Rider inside the building while admiring the many regional landscape photographs on the walls.
Image by Elred under Creative Commons License.
6

The library building was built in the early 1960s and is architecturally very different from other buildings on the campus. The high arches and terra cotta interwoven tile walls make this easy for the students to find to conduct their studies. Each arch represents a book with the spine pointed towards the vast West Texas sky. The statue by the front entry is the Prometheus Statue by Charles Umlauf. This reminds students to work diligently, even when homework never seems to end. The area between the library and the SUB is often used for student organizations to promote their causes and can get quite congested during the academic year, so be cautious when traversing this area.
7

The landscape architecture building was one of the first four buildings built on campus. Not only was this the stables for Texas Tech, it was used for meat judging and the occasional basketball game. The department was featured in an episode of Extreme Makeover: Home Edition from the fall of 2010. From the west side of this building you can see the old barn and silo, where students kept their cattle and chickens in the early years of the university to sell eggs, meat, and milk to raise money to pay for their tuition.

Next door is the Southwest Collections building, which archives many documents from TTU’s history and displays several historical artifacts. Take a stroll through this building en route to the next stop.

Bypass the street and take the path between the buildings to get to the English and Philosophy courtyard. The prominent building along this portion of the walk is the old barn and silo, two of the first buildings on the tech campus. Follow the path past the Foreign Language buildings and into the courtyard between the Philosophy and English buildings, home to the fountain titled Headwaters by Larry Kirkland. The two hands cradle letters from the alphabet. Combined with the flowing water, this is meant to invoke a sense of the unquenchable thirst for knowledge. The benches and trees provide a place for students to contemplate their assignments or just daydream between classes.
9

The architecture building is ironically one of the least architecturally interesting buildings on campus, being built at a time when the state did not have money to spend on anything beside utilitarian construction. However, there are several hidden art installations throughout the building, including a below ground courtyard. When the building is open, which it often is, there are always displays of student works on the first floor.

Enroute to the Meat Sciences building, be sure to check out the outdoor pool area at the Recreation Center and the United Spirit Arena. Frequently club and intramural teams will practice and contest their matches on these fields.
10

10) The Meat Sciences Building and Cowamongus

The Bulls sculpture, by Peter Woytuk, on the east side of the Meat Sciences department is one of the most photographed sculptures on campus due to the placement of mortarboards on the bulls’ heads at graduation time. They guard the eastern entrance to the building. Once you go through the double doors and walk down the short hallway, you will enter a rotunda, turning toward your right you will see the entrance for Cowamongus, the restaurant and retail store for meat butchered and made in the building. The jalapeno and the blueberry sausage are excellent. During the summer, the ice cream is a welcome cold treat. While devouring one or more of these treats, enjoy the artifacts positioned around the rotunda and the mustang sculpture in the western courtyard. The building also hosts a rodeo arena and slaughtering facility.