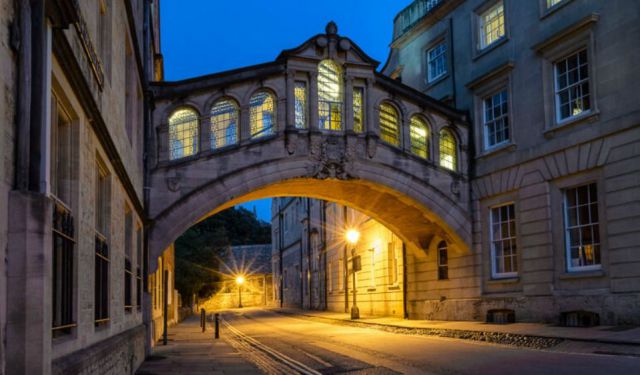 Ah, Oxford! The City of Dreaming Spires is most famous for its 800-year-old University, but nowadays the city is a bustling cosmopolitan town with a mix of ancient and modern. Located a short hop north and west of London, Oxford offers plenty to do for visitors. While there are plenty of activities in Oxford that cost a pretty pound, there are plenty of free (but premium) things to occupy your visit. Here is a list of our favorite ten free things to do in Oxford, England.

The 440 pound, 25-foot shark is embedded head-first in the roof of a house in Headington, a suburb of Oxford. The Headington shark first appeared in August 9, 1986, on the 41st anniversary of the dropping of the atomic bomb on Nagasaki. The sculpture is an expression of protest and anger against the use of nuclear power and weapons.

The shark was controversial when it first appeared. Oxford City Council tried to have it removed several times over the course of 6 years. Due to community support of the shark, it was allowed to remain. ...... (follow the instructions below for accessing the rest of this article).
This article is featured in the app "GPSmyCity: Walks in 1K+ Cities" on iTunes App Store and Google Play. You can download the app to your mobile device to read the article offline and create a self-guided walking tour to visit the attractions featured in this article. The app turns your mobile device into a personal tour guide and it works offline, so no data plan is needed when traveling abroad.