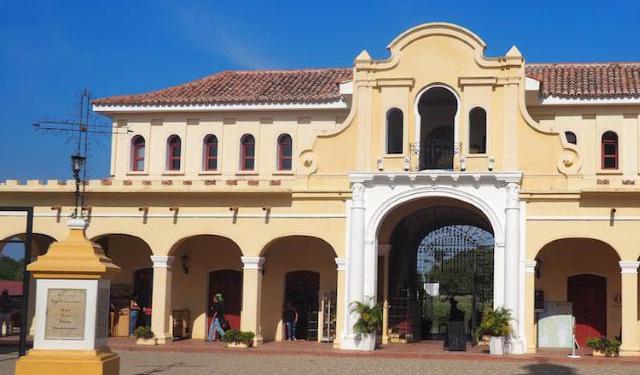 Mompox, also known as Santa Cruz de Mompox, or even Mompós, is a town in Colombia 125 miles south of Cartagena with a history as rich and enticing as its larger northern neighbour. And, like Cartagena, it boasts gloriously preserved buildings from its early Spanish colonial rule. But that’s where the similarities end. Whereas Cartagena is now a tourist magnet and a regular cruise ship stopping off point, Mompox is virtually unknown outside of Colombia. Which is a crying shame because it’s one of our favourite Colombian towns and one that we believe should be on any traveller’s list of places to see when visiting the country. Convinced? Well, here are ten things you ought to know about Colombia’s forgotten colonial gem.

For its first 300-or-so-years of existence, the story of Mompox was one of unbridled success. Founded as a port in 1540 on the Magdalena River by early Spanish settlers, it quickly developed as a hub for merchants transporting all manner of goods between the Andes and the Caribbean coast. And its remote location helped it became a safe place for wealthy Spaniards and traders to hide their gold and other treasures from pirates. To cap it all, it even minted coins for the colony. Indeed, by the early 17th Century, the town’s wealth was perhaps best exemplified by its Calle de la Albarrada, a riverside street dripping with glorious colonial architecture. Such was its confidence that, by 1810, it had become the first Colombian town to declare independence from Spain. And, shortly after, Simon Bolivar (Caracas-born liberator of much of South America) came to Mompox and recruited 400 Momposinos to fight for and ultimately gain independence for western Venezuela. Which prompted him to famously remark, “If to Caracas I owe my life, it’s to Mompós I owe my glory”. ...... (follow the instructions below for accessing the rest of this article).
This article is featured in the app "GPSmyCity: Walks in 1K+ Cities" on iTunes App Store and Google Play. You can download the app to your mobile device to read the article offline and create a self-guided walking tour to visit the attractions featured in this article. The app turns your mobile device into a personal tour guide and it works offline, so no data plan is needed when traveling abroad.