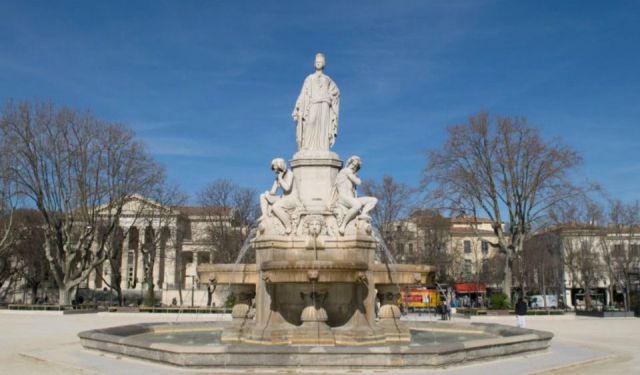 Visiting the south of France is always a good idea right? That was my thinking anyway upon finding a cheap flight to the city of Nimes last year. Not familiar with the city, I assumed I’d only stay a couple of days there before moving on to somewhere more well-known like Marseilles. I actually ended up spending a full week in Nimes, getting work done in my delightful airbnb and sightseeing. As a bonus, I managed a day trip to the stunning Pont du Gard.

March may seem like a strange time of year to visit the south of France but it was already starting to warm up. Plus, it was very light on tourists. Despite how long I was there, I saw most of the sights in one of my first days there. Nimes is a moderate-sized city, with a rich history but even then you can hope to see most of its major landmarks in 24 hours. Would I recommend staying only one night? No, but if that’s your only choice, here are the sights in Nimes that should be your priority.

Without question, Nimes’ main attraction is its immense Arena. Similar in look to Rome’s Colosseum and Pula’s Arena, this massive Roman amphitheatre stands out among the rest of the city. Built in 70 AD, the amphitheatre was symbolic of Nimes’ important and size then, when it was known as Nemausus. So great is Nimes’ Roman heritage and preserved connection to the era, that the city is often auspiciously dubbed “The French Rome“. No small honour that! ...... (follow the instructions below for accessing the rest of this article).
This article is featured in the app "GPSmyCity: Walks in 1K+ Cities" on iTunes App Store and Google Play. You can download the app to your mobile device to read the article offline and create a self-guided walking tour to visit the attractions featured in this article. The app turns your mobile device into a personal tour guide and it works offline, so no data plan is needed when traveling abroad.