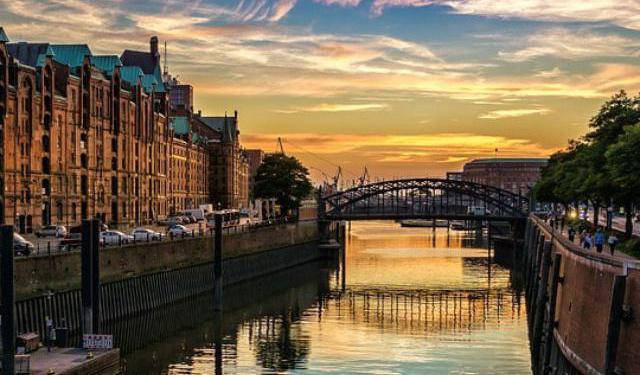 Hamburg's history begins in the 9th Century as a mission settlement to convert the Saxons. Since the dawn of the city, Hamburg has always been a trading city. Located near the sea, the Hamburg ports gave this city its identity, one that is based on water, commerce and war.

Start the historical tour from the central train station, Hauptbahnhof to discover a myriad of historical sites, landmarks and events. The train station itself opened in 1906, to replace four other separate stations, and today is one of the busiest stations in Germany. During World War II, the station received damage from the World War II allied bomb raiding on November 9. 1941.

Nearby the hauptbahnhof (central train station), is one of Germany's most prominent art museums. In my opinion, Berlin has the best, but Hamburg is worth the visit. Explore a mix of fine art and modernism with old and new timer artists such as Rembrandt, Goya and Canelleto, Picasso, Warhol and Kircher.

As seen in the above image, Jungfernsteig is a waterfront promenade on the Binnenlaster. On land, explore a myriad of shops and department stores, cafes and independent shops in historical, Neoclassical buildings. The name, Jungfernsteig came about as a tradition of wealthy Hanseaten families who flaunted their unmarried daughters for eligible bachelors. ...... (follow the instructions below for accessing the rest of this article).
This article is featured in the app "GPSmyCity: Walks in 1K+ Cities" on iTunes App Store and Google Play. You can download the app to your mobile device to read the article offline and create a self-guided walking tour to visit the attractions featured in this article. The app turns your mobile device into a personal tour guide and it works offline, so no data plan is needed when traveling abroad.