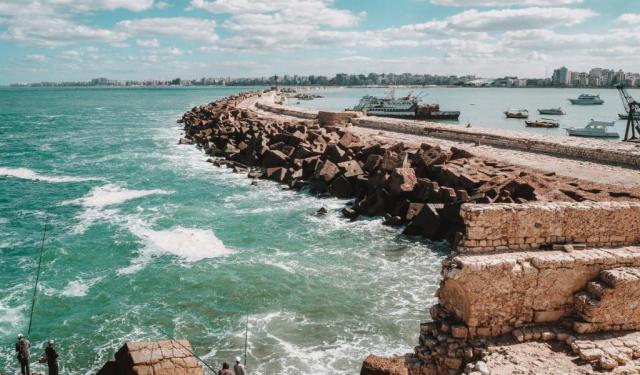 If you’re looking for reasons why you should visit Alexandria in Egypt then this is the post for you. I can’t believe that I had been putting off a visit. Once I arrived, I realised just how wrong I was to doubt going. It’s a stunning city full of amazing things to do based on the North coast of Egypt. It felt so good to breathe in fresh air and you could see the Mediterranean sea for miles. Thousands of years ago, Alexandria was a famous and powerful city. Originally founded by Alexander the Great, all the world’s scripted knowledge at that point in time was held in the Great Library of Alexandria. It used to be the largest library in the world before it was reduced to ashes by a great fire after Julius Caesar was besieged! The lighthouse, which was destroyed in an Earthquake much later, also used to be one of the seven wonders of the ancient world. Today, Alexandria is Egypt’s second largest city and boasts a thriving port along its 32 kilometres of coastline. It is home to the medieval Citadel of Qaitbay, the royal Montazah palace, Bibliotheca library and lots of other gems to explore. ...... (follow the instructions below for accessing the rest of this article).
This article is featured in the app "GPSmyCity: Walks in 1K+ Cities" on iTunes App Store and Google Play. You can download the app to your mobile device to read the article offline and create a self-guided walking tour to visit the attractions featured in this article. The app turns your mobile device into a personal tour guide and it works offline, so no data plan is needed when traveling abroad.