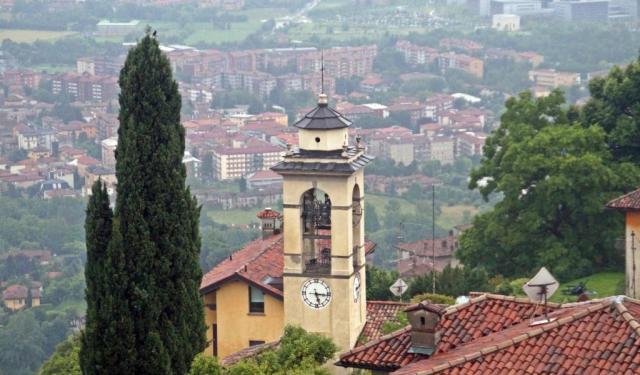 I arrived in Bergamo, an old city in Northern Italy, on a rainy afternoon in early June. I was officially back in Europe, and after 3 months of travelling through (mostly sunny) Asia, it was a welcome change of weather, architecture and easiness of travel. A month earlier, I had decided to book a short stopover in Italy on my way back to Denmark from Kyrgyzstan, since the extra flight was just 200 DKK more. My original plan was to explore Milan for the afternoon, but when I arrived at Bergamo Airport and saw a stunning picture of the cityscape of Bergamo, I changed my mind. Milan is an hour away by bus from the airport and Bergamo is just 15 minutes away, plus Milan is easy to get to some other time, whereas this might’ve been my only chance to explore Bergamo.

So for the sake of easiness and because Bergamo looked so awesome, I bought a 5 euro all-day transport ticket for the city of Bergamo. My flight to Denmark wasn’t until the next morning, so I had all evening to explore the city, although the constant rain and thunder didn’t exactly give me any chance to just sit about and people-watch, which is something that I enjoy doing in cities. Instead, I walked to all of the main sights and despite the weather and the fact that I had to use an umbrella since I left my jacket at the airport (I hate umbrellas), I really enjoyed exploring Bergamo and would recommend going there, if you have a few hours to kill at the airport! ...... (follow the instructions below for accessing the rest of this article).
This article is featured in the app "GPSmyCity: Walks in 1K+ Cities" on iTunes App Store and Google Play. You can download the app to your mobile device to read the article offline and create a self-guided walking tour to visit the attractions featured in this article. The app turns your mobile device into a personal tour guide and it works offline, so no data plan is needed when traveling abroad.