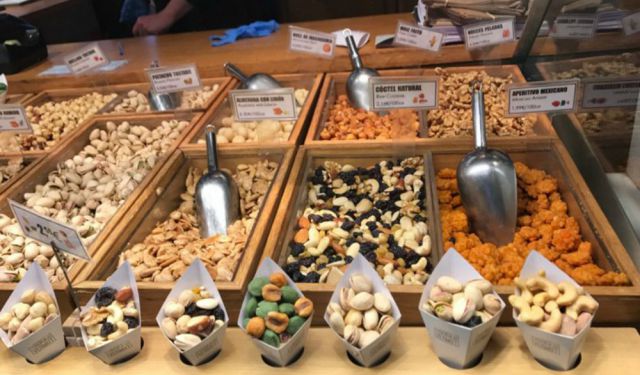 Getting to and from Morocco from the USA wasn’t that easy. We opted for an 18 hour layover in Madrid, and enjoyed an afternoon and evening of dining. Suman found a great hotel called Petit Palace just off the Plaza Major. This hotel was in a prime location and only $96. The vibe was modern, and it included everything we needed including a view of the city from our top floor room. We were not staying long enough to take advantage of the bikes or the free walking tour, but these are great amenities. We dropped our stuff and went in search of lunch as Iberia ran out of food for purchase for those in the last rows of the plane. They had some items, but not what we wanted. Anyway, we were hungry.

Suman had a place in mind from TripAdvisor called Casa Gonzales. They served lots of cheese and meats as well with breads with spreads. They were known for their breads with spreads. I ordered an artichoke spread. It was mostly bread with little spread. I think Suman’s choice of a charcuterie plate was a much better option. It was good, but I wished for more tapas varieties especially after our phones took us around in circles as we hunted for the quaint restaurant. ...... (follow the instructions below for accessing the rest of this article).
This article is featured in the app "GPSmyCity: Walks in 1K+ Cities" on iTunes App Store and Google Play. You can download the app to your mobile device to read the article offline and create a self-guided walking tour to visit the attractions featured in this article. The app turns your mobile device into a personal tour guide and it works offline, so no data plan is needed when traveling abroad.