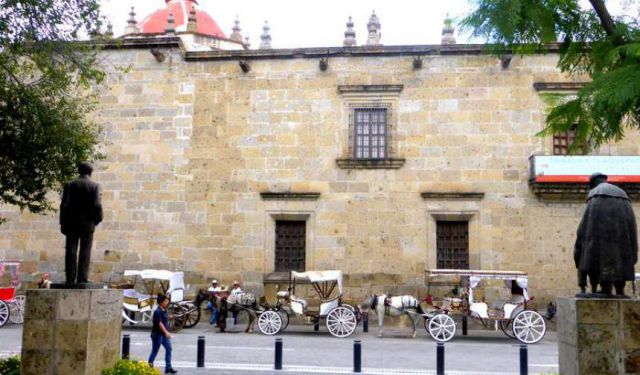 We must confess we were nervous heading into Guadalajara, Mexico but we stepped out of our comfort zone and headed there for 3 nights in 2015. Why were we so nervous? The nervousness came about a few months earlier when CNN reported that the drug cartels of Mexico had blown up banks and gas stations in and around Guadalajara. Expats had to drive into town in convoys to purchase groceries, buy fuel and do their every day chores. We had a house sit close by where we were due to spend 2 months, on checking with the Home Owner we mutually decided it was not considered safe enough.

We found a colonial city of incredible architecture, lots to see and do and you should plan to visit on a Sunday. On Sundays join the locals and enjoy a morning where cars are prohibited on Avenidas Vallarta and Juarez.

May 30, 1574 it caught fire as a result of neighbors firing shots into the air which fell onto the cathedral.

Earthquakes in 1932, 1957, 1979, 1985, 1995 and 2003 have caused the North Tower to tilt and more structural damage to the Tower ...... (follow the instructions below for accessing the rest of this article).
This article is featured in the app "GPSmyCity: Walks in 1K+ Cities" on iTunes App Store and Google Play. You can download the app to your mobile device to read the article offline and create a self-guided walking tour to visit the attractions featured in this article. The app turns your mobile device into a personal tour guide and it works offline, so no data plan is needed when traveling abroad.