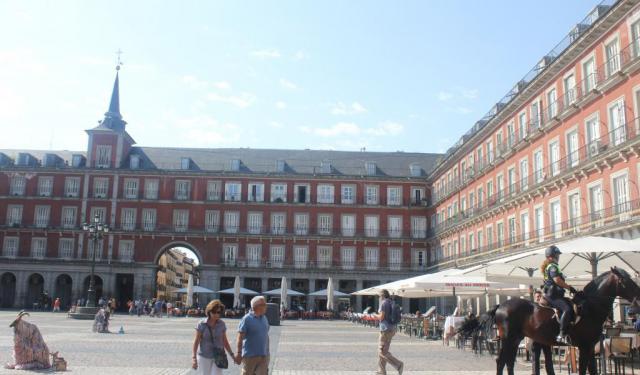 5 Things to Do in Madrid with a Toddler, Madrid, Spain (B)

We spent three nights in the Spanish capital, Madrid, when Mrs T was one year old. I have to admit, it wasn’t the easiest age to be traipsing around a city as we were very conscious of her needing to be active now and then (she was crawling at the time). But, we still had a great time in Madrid with a toddler and hopefully our experiences will help anybody visiting Madrid although here are some extra tips and recommendations for those travelling to Madrid with kids.

An impressive looking palace from the outside, inside it is even more magnificent. Highly recommend taking a look.

King Carlos III was the first royal to live in the palace in its current design in the 1760s after the former palace was destroyed in a fire in 1734. The final plans for the design were drawn up by Juan Bautista Sachetti following the unexpected death of his mentor Filippo Juvara. Although it is the official residence for the current royal family, they no longer reside there with the palace only used for state ceremonies. ...... (follow the instructions below for accessing the rest of this article).
This article is featured in the app "GPSmyCity: Walks in 1K+ Cities" on iTunes App Store and Google Play. You can download the app to your mobile device to read the article offline and create a self-guided walking tour to visit the attractions featured in this article. The app turns your mobile device into a personal tour guide and it works offline, so no data plan is needed when traveling abroad.

Create Your Own Self-Guided Walks in Madrid
Guide Name: 5 Things to Do in Madrid with a Toddler
Guide Location: Spain » Madrid
Guide Type: Self-guided Walking Tour (Article (B))
Author: Elizabeth Callaghan
Read it on Author's Website: https://www.wandermum.co.uk/madrid-five-things-to-do-with-a-toddler/
Sight(s) Featured in This Guide: