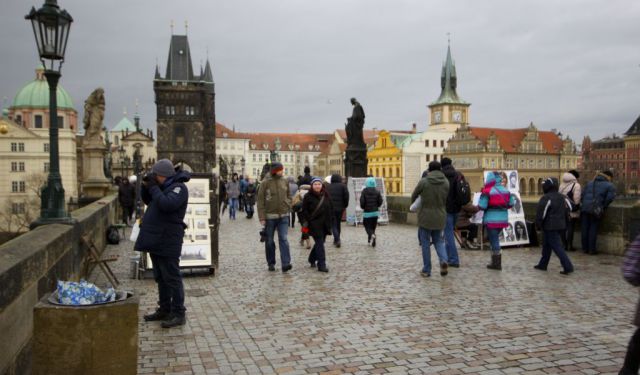 8 Historical Sites You Must See in Prague, Prague, Czech Republic (B)

Prague or "Praha" is the Czech Republic's most beloved capital city. Situated in the northwest, visitors easily make way from nearby larger cities such as Berlin and Warsaw.

Prague is one of the most historic European capital cities. This medieval city flourishes with Gothic, Romanesque and Baroque era architecture alongside with secretive, narrow pathways that meander to remote courtyards and off-the-beaten-path streets.

Those who visit Prague are rarely disappointed. Between architectural beauties and fairy tale-like streets, these are some of the best historic sites to see and visit while in Prague.

There's more to Prague than what meets the eye. In "recent" history, 1988 to be exact, the Lennon Wall served as a source of irritation to the communist party. Young Czechs wrote grieving messages on the wall, all the way to the Charles Bridge. This led to a clash between the police and protestors. The movement was described as "Lennonism" Communism banned western pop songs, but specifically, The Beatles as Lennon's lyrics praised freedom, something that did not exist in the East. Today, the wall continues to change, mainly with Beatle quotes, images and logos. Look for the wall in Mala Strana, near the French Embassy. ...... (follow the instructions below for accessing the rest of this article).
This article is featured in the app "GPSmyCity: Walks in 1K+ Cities" on iTunes App Store and Google Play. You can download the app to your mobile device to read the article offline and create a self-guided walking tour to visit the attractions featured in this article. The app turns your mobile device into a personal tour guide and it works offline, so no data plan is needed when traveling abroad.