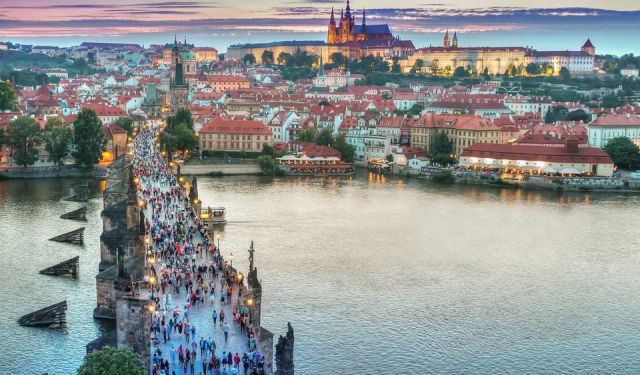 8 Must-Visit Churches and Cathedrals in Prague, Prague, Czech Republic (B)

It’s no secret on why people love Prague. It’s beautiful, majestic and historic. The ancient architecture and tight-knitted alleyways ignites history, making one feel as if they are walking through a Medieval fairy tale. Churches are one of the most visited architectural sites throughout Europe. And Prague has no shortage of churches. Whether you seek intricately painted art, angelic music or history, be sure to visit one, or all, of these churches in Prague.

Located at the Prague Castle, this is one of the most visited churches in the city. The construction took centuries to complete and one will notice the Gothic masterpiece, which is a spiritual symbol of Prague. Construction began in 1344 commissioned by Charles IV and reached its final phase of construction between 1873-1929. This cathedral serves importance as it has coronated the many Czech kings and queens.

Founded in 1385, Tyn served as the Old Town’s Church. Some claim its history dates further back, but if searching for history, this is one church to visit. The Hussites controlled the church in the early 15th Century. Sadly, this was a period of history where Roman Catholics slaughtered the Hussites, which led to the Jesuits to take control. The Jesuits replaced the Hussites symbol with a figure of Mary nailed between the towers. If you look closely, the Towers are not symmetrical. One tower, Adam, is larger than the other, Eve. A fire occurred in 1679, which resulted in the Baroque-style of reconstruction. The organ dates back to 1673 and is the oldest in Prague.  ...... (follow the instructions below for accessing the rest of this article).
Image Courtesy of Pexels.
This article is featured in the app "GPSmyCity: Walks in 1K+ Cities" on iTunes App Store and Google Play. You can download the app to your mobile device to read the article offline and create a self-guided walking tour to visit the attractions featured in this article. The app turns your mobile device into a personal tour guide and it works offline, so no data plan is needed when traveling abroad.