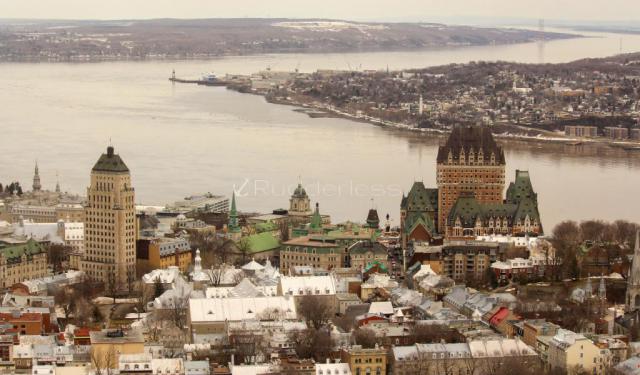 The Frontenac was constructed for the Canadian Pacific Railway in 1894 and is one of the city’s most prominent landmarks. It can not only be seen from most parts of the city but from miles away as it stands tall in front of Dufferin Terrace.

This elevated vantage was the original site of Fort St.-Louis, the governor’s residence in colonial times – tourists can see the ruins underneath the promenade. One of the six notable moments in the Château Frontenac’s 125-year history is during World War II, it was the host of two important conferences on military strategy. In August 1943, the leaders of the Allied powers, U.S. President Franklin D. Roosevelt and U.K. Prime Minister Winston Churchill – hosted by Canadian Prime Minister Mackenzie King met to plan the invasion of Normandy.

Named after Lord Dufferin, The Dufferin Terrace is located on the site of Fort Saint-Louis, which was built by Samuel de Champlain in 1620 – and where he died in 1635. From here you’ll view of the river as well as on Lower Town and Place-Royale ...... (follow the instructions below for accessing the rest of this article).
This article is featured in the app "GPSmyCity: Walks in 1K+ Cities" on iTunes App Store and Google Play. You can download the app to your mobile device to read the article offline and create a self-guided walking tour to visit the attractions featured in this article. The app turns your mobile device into a personal tour guide and it works offline, so no data plan is needed when traveling abroad.