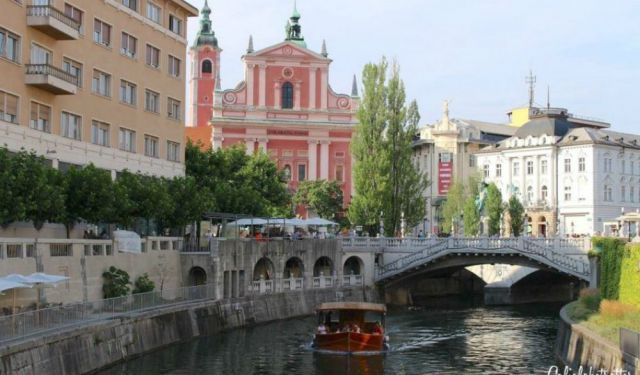 While on our road trip to Croatia back in 2015, we made sure to stop at the capital of Slovenia for a day, Ljubljana! The name itself sounds intimidating, but once you learn how its pronounces, its as easy and friendly as the country itself! (Pronounced: Lub-lee-yana).

Ljubljana is one of the most hip, up and coming new destinations to visit that is mostly overlooked by the hordes of tourists. It is often said that this city ranks among the perfect mid-sized European cities and has all of the comforts of being a big city while still maintaining it’s small town charm and friendliness. Slovenia became the first former Communist country to join the Eurozone in 2007 and has since seen a slight increase in tourism.

Having previously visited and fallen in love with it, we decided to make it the the first stop on our honeymoon for the night. This gave us the chance to explore just a bit more than our first visit. Our second glance was just as fabulous as the first!

The first port of call was the iconic pink church, also known as “Franciscan Church of the Annunciation” which can be found in the main square called Prešernov trg (Prešernov Square). Inside, the church is decorated with early-Baroque frescos while the outside is designed in the early 17th century Baroque style. ...... (follow the instructions below for accessing the rest of this article).
This article is featured in the app "GPSmyCity: Walks in 1K+ Cities" on iTunes App Store and Google Play. You can download the app to your mobile device to read the article offline and create a self-guided walking tour to visit the attractions featured in this article. The app turns your mobile device into a personal tour guide and it works offline, so no data plan is needed when traveling abroad.