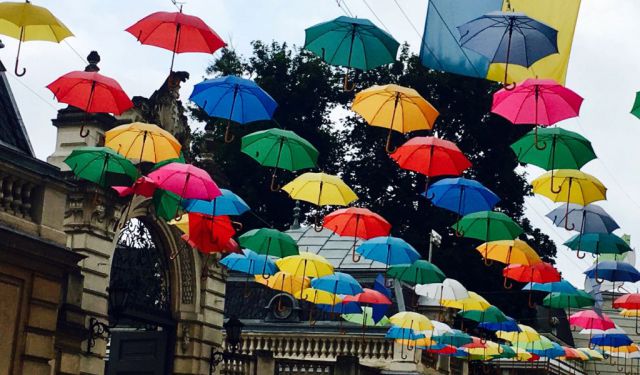 Arriving in Lviv was what I’d imagine arriving in an abandoned mansion in Detroit would be like. Beautiful, but left to deteriorate due to mismanagement. A mix of styles that have fallen to disarray, now trying to piece back together some semblance of an identity.

The city is full of foundational beauty; Austrian-style architecture composes much of the city center’s buildings. Historical churches dating from the 13th century are scattered throughout the city, evidence of the Austrian and Polish eras of the city. The buildings have scars from wars and neglect and evidence of Soviet occupation, but the city survived these painful parts of history mostly unscathed.

Americans don’t need a visa to enter, but just be aware that you are leaving the EU when you cross the border. Guards asking for your passport on the bus is standard procedure.

3. Hospitals are not well-maintained either. During my time here I met an American doctor who was working as a full-time volunteer in Ukraine and he literally said that if I were to get sick or injured I should do everything I can to get to an EU country to seek medical attention. Thankfully, I didn’t have any emergencies! ...... (follow the instructions below for accessing the rest of this article).
This article is featured in the app "GPSmyCity: Walks in 1K+ Cities" on iTunes App Store and Google Play. You can download the app to your mobile device to read the article offline and create a self-guided walking tour to visit the attractions featured in this article. The app turns your mobile device into a personal tour guide and it works offline, so no data plan is needed when traveling abroad.