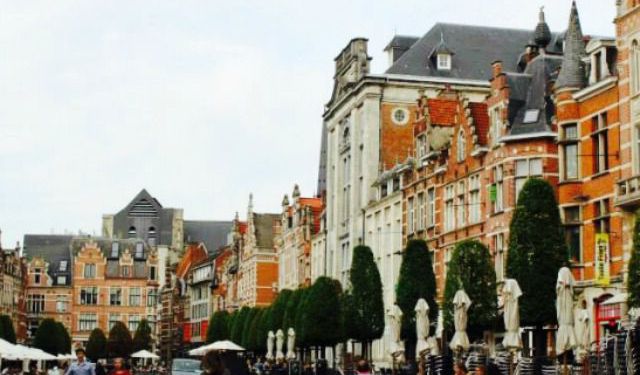 A Drive to Leuven (Just for Waffles!), Leuven, Belgium (B)

Just a hop, skip and a jump from Brussels, about 16 miles (25km) is the historic Flemish town of Leuven which is vastly overlooked by the tourists all headed directly to the capital. This town originally grew from a simple camp of Julius Caesar to an important trading center for cloth before becoming one of the most prestigious university towns in Europe, home to important scholars such as Erasmus. Today, the town has a predominant university feeling.

What drew me to this town was the stunning Stadhuis (city hall) which was built and designed in 1439-63 so as to show off the wealth of the city’s merchants. I first discovered this town via Pinterest and knew I would have to see this stunning piece of architecture. The city hall is renowned for its tall and long structure as well as the intricately carved and decorated façade of medieval figures in 300 niches which tell folktales and biblical stories.

The Stadhuis dominates the Grote Markt (Grand Square) which is also filled with many cafes and restaurants in the surrounding 17th century guild houses. Like Brussels, the Grand Square is turned into a flower carpet with a specific theme made of begonias which takes place every two years. The next should take place August 2016. ...... (follow the instructions below for accessing the rest of this article).
This article is featured in the app "GPSmyCity: Walks in 1K+ Cities" on iTunes App Store and Google Play. You can download the app to your mobile device to read the article offline and create a self-guided walking tour to visit the attractions featured in this article. The app turns your mobile device into a personal tour guide and it works offline, so no data plan is needed when traveling abroad.