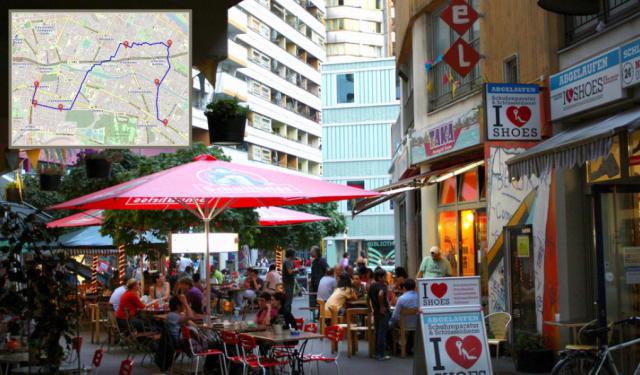 A Foodie's Guide to Berlin's Kreuzkölln Area, Berlin, Germany (B)

Few areas of Berlin can illustrate the city's transformation since the fall of the Berlin Wall as vividly as Kreuzberg. Once curbed by the Wall on three sides, Kreuzberg (then part of West Berlin) began to draw artists and quirky lot (immigrants, hippies, squatters and the likes) in their numbers to eventually become the hipster epicenter of the capital. Nowadays home to a large Turkish community, this neighborhood also accommodates some world-class street food including, but not limited to, the yummiest kebabs on the planet, outside Istanbul!

Our walk of Kreuzberg starts on Mehringdamm street in the southern part of the district, offering a wealth of food options. Among them, just as on almost any other street in the German capital, are the two of Berlin’s most popular snacks – currywurst and döner kebab. Mehringdamm stretches from Mehringbrücke in the north all the way down to Tempelhof in the south and has earned a place on the modern food map of Berlin if only for two spots – the legendary Mustafa’s Gemüse Kebab stall (Mehringdamm 32) and Curry 36 - a snack bar found further up the street, at Mehringdamm 36, reputedly serving the best currywurst and fries in the city. ...... (follow the instructions below for accessing the rest of this article).
Image Courtesy of Andreas Lehner.
This article is featured in the app "GPSmyCity: Walks in 1K+ Cities" on iTunes App Store and Google Play. You can download the app to your mobile device to read the article offline and create a self-guided walking tour to visit the attractions featured in this article. The app turns your mobile device into a personal tour guide and it works offline, so no data plan is needed when traveling abroad.