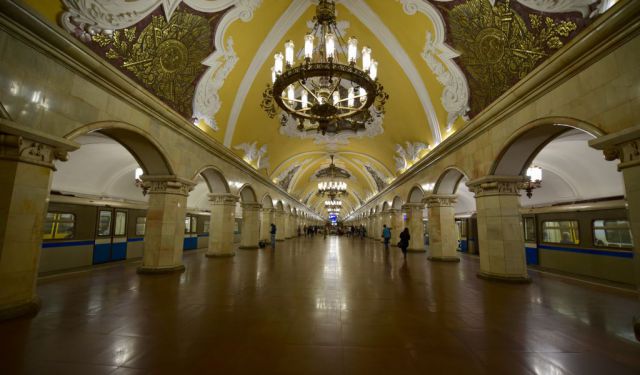 A Guide to the Most Beautiful Moscow Metro Stations, Moscow, Russia (B)

Your first encounter with Moscow Metro stations will surprise you. Never has a rail system been more appealing and just a little intriguing.

We have travelled on a lot of public train systems all over the world. We have marvelled at the modern efficiency of some rail systems. Especially in Asia. We have baulked at the cost of others such as the Tube in the UK and in New York, we pondered which is uptown and which is downtown in relation to where we need to be. We have also enjoyed a polite attitude to public transport and ease of navigation, in places like Athens.

We have discovered first class can be anything but classy and navigated our way through some of the dirtiest and some of the cleanest train systems the world has to offer. However, we have never come across anything as impressive as the Moscow Metro stations.

Once described as a ” Subterranean paradise for the people”, the Moscow Metro is one of the most extraordinary subway systems in the world.

Stalin had the vision to create a Metro system that would resemble “Peoples Palaces”. His vision was realised in 1935 when the Metro was opened with just 13 stations. ...... (follow the instructions below for accessing the rest of this article).
This article is featured in the app "GPSmyCity: Walks in 1K+ Cities" on iTunes App Store and Google Play. You can download the app to your mobile device to read the article offline and create a self-guided walking tour to visit the attractions featured in this article. The app turns your mobile device into a personal tour guide and it works offline, so no data plan is needed when traveling abroad.