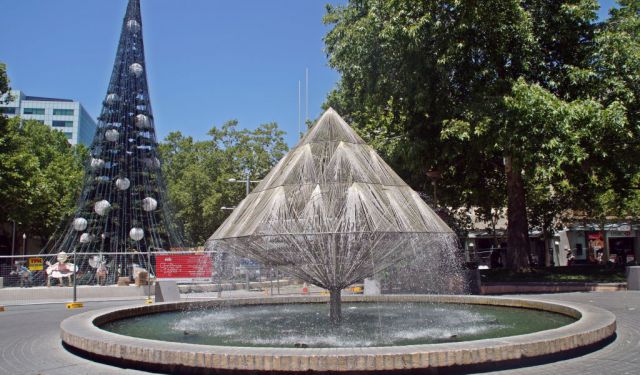 A Hot Day of Exploring in Canberra, Canberra, Australia (B)

On one of my first days in Sydney, I decided to take a bus and head out of the city and go to the capital of Australia, Canberra. Contrary to popular belief, Canberra is in fact the capital. Not Sydney and not Melbourne, but Canberra. A small unknown spot on the map with only 350.000 inhabitants, located midway between the two previously mentioned cities.

Whenever I told someone about my plan to go to Canberra, I was met with comments like “but there’s nothing there”. Apparently, Canberra is a boring city with nothing to see and therefore, no one goes there – not even Australians. But it’s the capital, and since I’m a capital collector and generally believe in making up your own mind about places rather than just seeing whatever is popular with others, I decided to head to the capital and see it with my own eyes.

Early in the morning, I caught a Greyhound bus from the central station in Sydney and four hours later, I had arrived in the center of Canberra.

The first thing that I wanted to see was the Australian War Museum. I picked up a map at the tourist office, determined to walk everywhere that day. Something that I would later regret! The weather was so hot that day and in some areas it even got to 45 degrees. Thankfully, I had a water bottle and I wore light clothes, but I still felt as though I could faint any minute. I used any excuse to walk in the shade. And since the distances in Canberra are quite far between the sights, I probably should’ve just spent some money on the city busses instead of dragging myself around the city. ...... (follow the instructions below for accessing the rest of this article).
This article is featured in the app "GPSmyCity: Walks in 1K+ Cities" on iTunes App Store and Google Play. You can download the app to your mobile device to read the article offline and create a self-guided walking tour to visit the attractions featured in this article. The app turns your mobile device into a personal tour guide and it works offline, so no data plan is needed when traveling abroad.