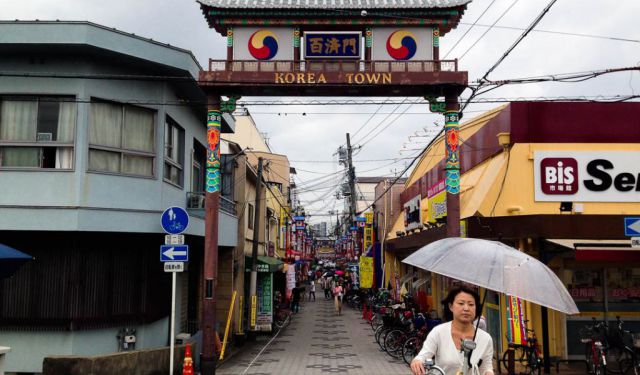 A Quick Guide to Osaka’s Korea Town, Osaka, Japan (B)

As we stepped out of the train station and into the attached undercover market that snakes towards the centre of Tsuruhashi, a wave of nostalgia washed over me. I was literally dripping, too – it had been sheeting down all morning and I’d long ago surrendered in the battle of the thousand umbrellas.

The array of mismatched shops that line the roofed walkway, selling everything from linen to handbags to crockery, reminded me of the Oriental Plaza in Johannesburg. The 360-store shopping center was a supporting character in the story of my childhood; every so often we’d make the trip into ‘town’ to profit off its bargains and spend our savings on samosas and roti.

Here, the smell of curry was replaced with barbecue and the signs hanging above each of the stores were not tamil or hindi, but kanji. Still, it was a different side of Osaka – older, quieter, poorer and distinctly un-Japanese. The Tsuruhashi District in Ikuno-ku is home to one of the country’s biggest Korean resident populations and its “Koreatown” is becoming increasingly popular locally and abroad. ...... (follow the instructions below for accessing the rest of this article).
This article is featured in the app "GPSmyCity: Walks in 1K+ Cities" on iTunes App Store and Google Play. You can download the app to your mobile device to read the article offline and create a self-guided walking tour to visit the attractions featured in this article. The app turns your mobile device into a personal tour guide and it works offline, so no data plan is needed when traveling abroad.