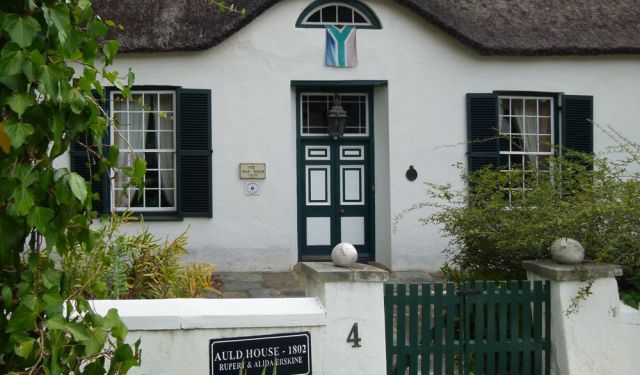 Historical buildings can tell you a lot about a place, giving clues to its past and present. I was reminded of this as I walked around Swellendam, South Africa’s third oldest town, and home to more than 50 heritage buildings, each with its own story to tell.

Swellendam has a long history. First settled by Europeans in 1745, it briefly declared itself a republic in 1795 but was soon reabsorbed into the newly founded British colony. It is the Dutch influence that is predominant here: many of the buildings are in the Cape Dutch style, often thatched with whitewashed walls, but almost always with the distinctive gable ends. Despite the name (and the gables which will be familiar to anyone who has visited Amsterdam), Cape Dutch architecture draws its inspiration from a mixture of European and Asian styles, reflecting the mixed heritage of Swellendam and South Africa.

Exploring the town felt a little like being in a living museum, with historical houses on every corner. Many were built at the height of Swellendam’s prosperity in the 19th century, but a few remain from the time the town was first founded in the 18th century. Some are still lived in; others have been coverted to offices or restaurants. Then there is the Dutch Reformed Church, built in 1911, with its splendid mix of architectural features: it is (of course) whitewashed with ornate gables, but also features Gothic, Baroque and other elements. ...... (follow the instructions below for accessing the rest of this article).
This article is featured in the app "GPSmyCity: Walks in 1K+ Cities" on iTunes App Store and Google Play. You can download the app to your mobile device to read the article offline and create a self-guided walking tour to visit the attractions featured in this article. The app turns your mobile device into a personal tour guide and it works offline, so no data plan is needed when traveling abroad.