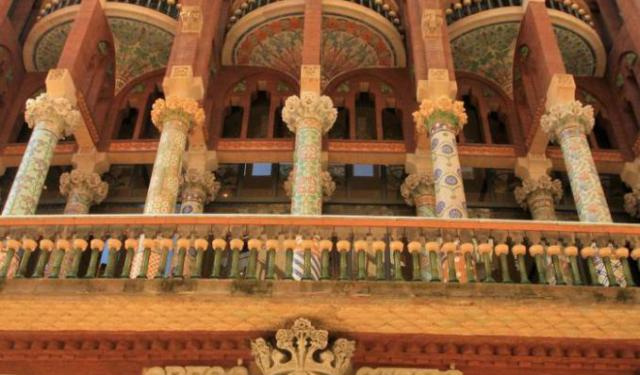 A Symbol of Catalan Pride, the Palau de la Musica, Barcelona, Spain (B)

Slightly more than a century ago, the pride of Catalonia already echoed loud and clear, carried by the Catalan Modernist architectural movement and the Renaixença cultural movement. The Palau de la Música in the gothic Barcelona is the communion of these influences. The most representative examples of this Catalan pride, it is one of the most beautiful concert halls in the world.

At the end of the 19th century, the economic boom of Catalonia pushed its elite to look for a rebirth to express the Catalan pride. This lead to the Renaixença cultural movement and the Modernist architectural movement that merged in the Palau de la Musica. One of the most eminent representatives of the Renaixença was the Orfeò Català, a renowned choral society that owned a small lot at the edge of the gothic quarter of Barcelona. The prominent and local architect Domènech i Montaner was commissioned to erect a concert hall on that lot. Beyond the challenge of building such a venue in an intricate location while the city was expanding in El Eixample modern district where most Art Nouveau projects were created, budget was a major concern. Funded by popular subscription, with the support of the bourgeoisie and a few industrials, Domènech i Montaner had to be sparing: he built the palace of the Catalan music in only three years, between 1905 and 1908, with the usage of cheap and locally-sourced materials. ...... (follow the instructions below for accessing the rest of this article).
This article is featured in the app "GPSmyCity: Walks in 1K+ Cities" on iTunes App Store and Google Play. You can download the app to your mobile device to read the article offline and create a self-guided walking tour to visit the attractions featured in this article. The app turns your mobile device into a personal tour guide and it works offline, so no data plan is needed when traveling abroad.