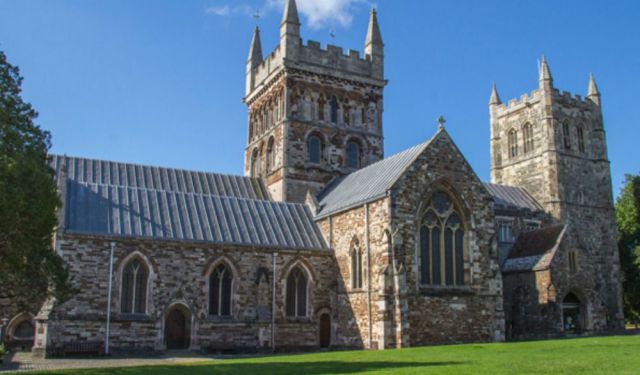 A Warm Welcome Awaits in the Dorset Town of Wimborne, Wimborne Minster, England (B)

The welcoming town centre of Wimborne is a large open space filled with the chairs and tables of cafés and restaurants that surround it. When I arrived it was summer and the sun was shining, brightening the blooms that decorated the pavement. It looked more continental than English even though I was in a small traditional Dorset town.

Very close to the town centre is Wimborne Minster. Thanks to the large, grassed area in front of it I was able to get a good view of this splendid building. As I did a circuit of the outside I noticed a small figure beside one of the windows of the West Tower above me. This painted statue called Quarter Jack is a famous feature of the Minster. These small statues, once a common feature, were installed to automatically strike the quarter hour. Here he strikes a pair of small bells. When he was installed in 1612 he was dressed as a monk but during the Napoleonic Wars his clothes were changed to those of a grenadier.

Behind the church I discovered God’s Acre This is part of an initiative to make churchyards wild life sanctuaries by planting wild flowers to encourage nature to flourish and bring churchyards alive. Wimborne Minster has won awards for its efforts in this direction having created a tranquil corner of the churchyard where visitors can sit to enjoy the flowers. ...... (follow the instructions below for accessing the rest of this article).
This article is featured in the app "GPSmyCity: Walks in 1K+ Cities" on iTunes App Store and Google Play. You can download the app to your mobile device to read the article offline and create a self-guided walking tour to visit the attractions featured in this article. The app turns your mobile device into a personal tour guide and it works offline, so no data plan is needed when traveling abroad.