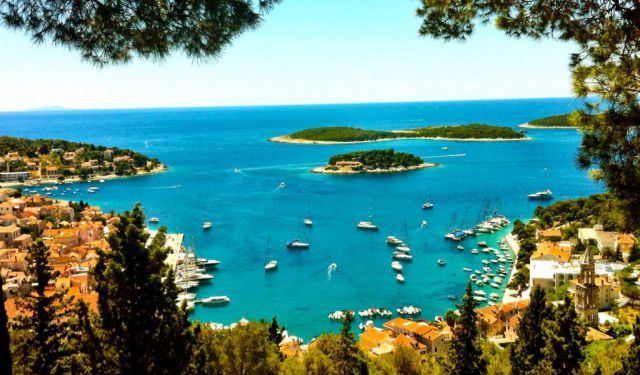 A Weekend in Hvar, Hvar, Croatia (B)

Hvar is the longest and sunniest Croatian island, and arguably one of the most beautiful and glamorous islands in the world with its lavender fields, hillside vineyards, medieval stone and swanky nightclubs. The small bay town of Hvar is set against the beautiful Adriatic Sea with 13th-century walls surrounding beautiful Gothic palaces and marble streets. Visitors love to wander the winding stone streets and explore the beaches by day and party here until the sun comes up!

Croatia’s climate is Mediterranean on the coast with warm summers and mild winters and continental inland with slightly hotter summers and extremely cold winters. July and August is peak season with the beaches packed with tourists and locals fleeing to the coast. You’ll still get the nice weather but a fraction of the crowds and prices…Hvar Town is estimated to draw around 20,000 people a day in the high season!

The easiest way to get to Hvar is to fly into Split airport (Croatia Airlines and EasyJet fly into Split) and take a high speed catamaran to Hvar Town. There is a local bus (#37) that runs every 20 minutes from the airport to the ferry or you can take a taxi. Hvar has four ferry ports: Hvar Town, Jelsa, Sucuraj and Star Grad. There are two companies, Jadrolinija and the Krilo company that offer fast catamaran sailings between Split and Hvar Town. The trip takes approximately an hour and it leaves from the first pier closest to the harbor waterfront promenade (less than a 5 minute walk from where you purchase tickets…buy your tickets ahead of time as they tend to sell out)! You can buy tickets at the kiosks at the Croatia Airport bus stop, in front of the Ferry Terminal and inside the Ferry Terminal itself. Look for the blue Jadrolinija signs. You can check the ferry schedule here. It is also possible to fly into Dubrovnik but the airport is 100km to the Drvenik ferry station. If you’re one of the lucky ones, you can charter a yacht and sail from Split directly to Hvar  ...... (follow the instructions below for accessing the rest of this article).
This article is featured in the app "GPSmyCity: Walks in 1K+ Cities" on iTunes App Store and Google Play. You can download the app to your mobile device to read the article offline and create a self-guided walking tour to visit the attractions featured in this article. The app turns your mobile device into a personal tour guide and it works offline, so no data plan is needed when traveling abroad.