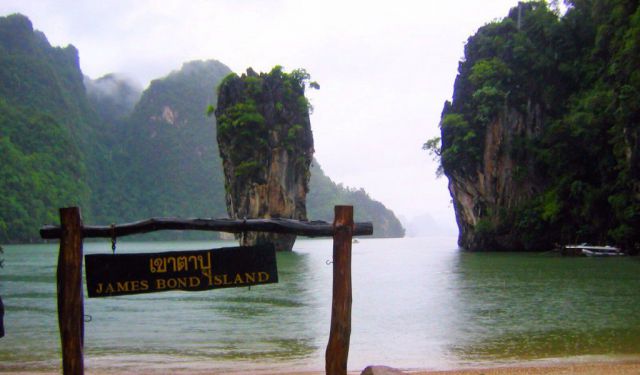 A Weekend in Phuket, Phuket, Thailand (B)

The island of Phuket is surprisingly large, about 50 km long by 20 km wide. It’s so huge that you rarely get the sense that you’re surrounded by water. Phuket is an international magnet for beach lovers and divers who submerge themselves in the Andaman Sea and blue lagoons by day and revel in the salmon sunsets by night. The island’s sin city of Patong is the biggest town and busiest beach with undoubtedly the liveliest (and sleaziest) nightlife in Phuket.

You can get to Phuket by bus, car, train and air! Flying from Bangkok into Phuket International is by far the most convenient with a mere one hour flight time. Several domestic airlines such as Thai Airways, Bangkok Airways, Phuket Air and Thai Air Asia offer daily direct flights. An intercity or public bus is the cheapest way to get to Phuket but the trip will take 12-14 hours. Taking a train is also rather cheap but there are no direct trains to Phuket. You would need to take the train to Surat Thani then take a bus to Phuket. Driving is also an alternative option that includes being able to stop at several beautiful places along the way but the trip is still a good 12 hours. ...... (follow the instructions below for accessing the rest of this article).
This article is featured in the app "GPSmyCity: Walks in 1K+ Cities" on iTunes App Store and Google Play. You can download the app to your mobile device to read the article offline and create a self-guided walking tour to visit the attractions featured in this article. The app turns your mobile device into a personal tour guide and it works offline, so no data plan is needed when traveling abroad.