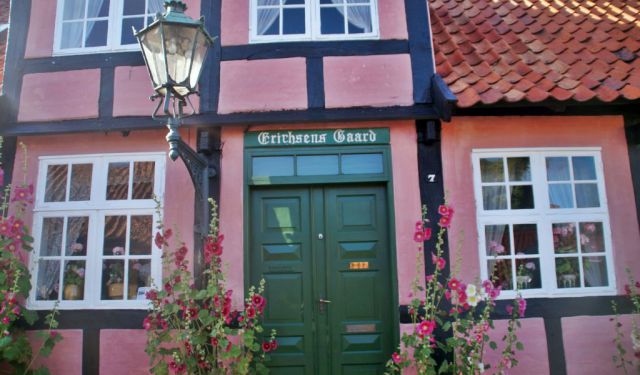 An Afternoon in Ronne: The Largest Village on Bornholm, Ronne, Denmark (B)

After three windy and rainy days, the weather was finally starting to look better, so last Thursday, I decided to go on my first trip that week after work. My teacher Rune gave me a lift to Rønne, the largest village on Bornholm, where I spent the afternoon sightseeing and hanging by the quaint harbour.

Rønne has a population of 13,700 people, which is approximately 35 % of the entire population on Bornholm. The village, which is the administrative center of Bornholm, is strategically located on the westernmost point of the island.

The old part of town is very charming with cobbled streets and flowers growing in front of half-timbered houses. Rønne reminded me a lot of Dragør on Amager, which I’d visited back in June with Nikolai, and also Ribe, the oldest town in Denmark, which I visited a lot as a child. I really adore these quaint Danish provincial towns!

I first walked to the Museum of Armed Forces, which unfortunately was closed for the day, but near it lies the impressive Kastellet, a round-shaped citadel with four meter thick walls. The citadel resembles the four round churches of Bornholm, but they were built several hundred years earlier. ...... (follow the instructions below for accessing the rest of this article).
This article is featured in the app "GPSmyCity: Walks in 1K+ Cities" on iTunes App Store and Google Play. You can download the app to your mobile device to read the article offline and create a self-guided walking tour to visit the attractions featured in this article. The app turns your mobile device into a personal tour guide and it works offline, so no data plan is needed when traveling abroad.