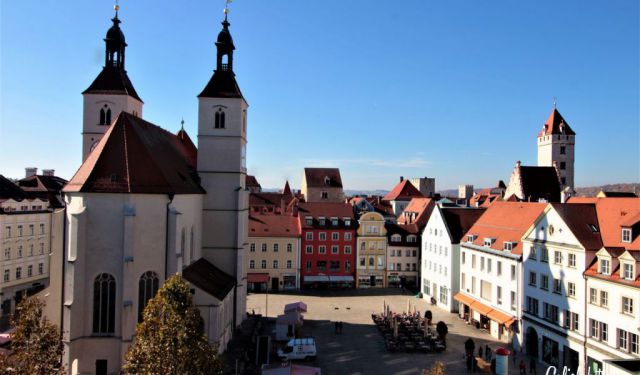 Regensburg really is the hidden gem of Bavaria and is actually quite often overlooked by visitors to Europe. As it was once the bustling empire of the entire Holy Roman Empire, it was one of the most important cities in Europe from 788 to 1806. Yet, it’s often overlooked for larger and more popular towns like Nuremberg or Munich but is one of the most scenic destinations in Bavaria!

As an expat who has lived in this city for 5 years, I have come to learn all the treasures this town has to offer and I can never stop raving about it. It truly is a diamond in a world of trendy hot spots.

Many people call Regensburg the “Northern Most Italy” because the summer is fantastic here and the streets are lined with cafes and small alleys that meander and wind through the whole town and many beautiful colored buildings. It’s impossible to get lost with the spires of the Regensburg Cathedral always leading you home. With three rivers, the Naab, the Regen and the Danube, the first settlement was founded during the Stone Age and because of its great location, a Roman fort was built here called Castra Regina. It was the capital of Bavaria from 530 to to the 13th century and grew into a vital medieval trading route when the Stone Bridge was built between 1135 and 1146. ...... (follow the instructions below for accessing the rest of this article).
This article is featured in the app "GPSmyCity: Walks in 1K+ Cities" on iTunes App Store and Google Play. You can download the app to your mobile device to read the article offline and create a self-guided walking tour to visit the attractions featured in this article. The app turns your mobile device into a personal tour guide and it works offline, so no data plan is needed when traveling abroad.