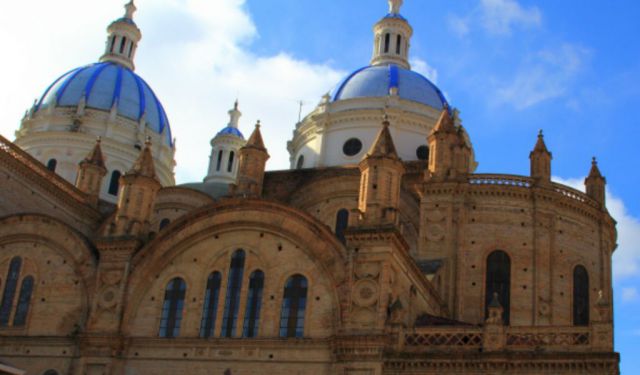 A line of mist shrouded figures marched across the horizon above me towards a round stone structure that dominated the surrounding countryside. Were they ghosts of the Cañari or the Incas both of whom had lived and worshipped here? As the mists cleared I realised they were nothing more than a crocodile of tourists armed with walking poles and cameras following their guide around the Ingapirca archaeological site in Ecuador.

Generally associated with the huge and splendid Machu Picchu in Peru here at Ingpirca I learnt more about the Incas as a people. When they met with resistance from the Cañaris, one of the most important of several indigenous tribes who inhabited the territory that is now Ecuador before the arrival of the Inca Empire they tried to absorb them into their own culture. But they fought fiercely to protect their own culture (which still survives today) and never abandoned their desire to be free of the Incas. Soon after the Spanish leader Francisco Pizarro arrived in Ecuador he discovered this and formed an allegiance with the Cañaris who fought alongside the Spanish in the battle of Sacsayhuaman in 1583 when the forces of the Inca Empire were defeated. The tolerance of the Incas may have led to their downfall but it also left some interesting questions amongst the ruins of Ingapirca. The Incas were not here long enough to build a huge temple instead they built a small temple to worship the sun alongside the original site of a temple built by the Cañaris to worship the moon. The elliptical shape of this temple contrasts with the more usual angular architecture and is evidence of their respect for the local culture. Once the Incas had overcome resistance they would first concentrate on residential and military structures and then bring thousands of people into the area to educate the locals and teach them their religion. Their building techniques were highly sophisticated, carefully cut blocks of stone were held together by mortar although the blocks used to build the temple were so well crafted they did not require mortar to keep them in place. Although to a large extent the Incas did replace Cañari architecture with their own, they not ignore their impressive achievements in astronomy and agriculture. We were intrigued by a large stone with 28 holes that was thought to be used as a lunar calendar. The holes filled with rainwater that told the date by different reflections of the light from the moon throughout the month. ...... (follow the instructions below for accessing the rest of this article).
This article is featured in the app "GPSmyCity: Walks in 1K+ Cities" on iTunes App Store and Google Play. You can download the app to your mobile device to read the article offline and create a self-guided walking tour to visit the attractions featured in this article. The app turns your mobile device into a personal tour guide and it works offline, so no data plan is needed when traveling abroad.