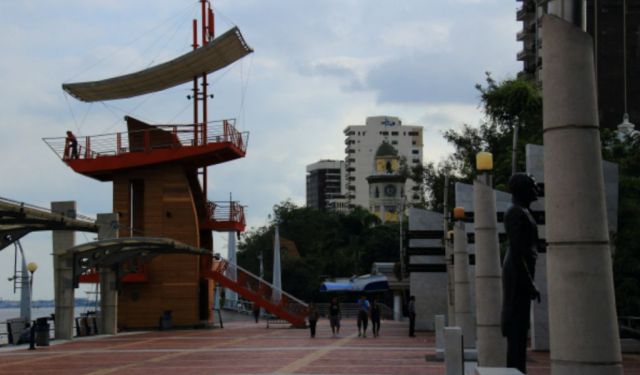 When we drove into the city of Guayaquil my first thought was thank goodness we are only staying here for one night. Three hours later I felt very differently about the largest city in Ecuador. This city has a fascinating history which is reflected in some fascinating buildings and monuments and it also has a park full of iguanas.

According to legend the name Guayaquil was derived from Guayas (the great Puna Indian chief who fought bravely against the Incas and then later against the Spanish), and Quill, the wife of Guayas. It is said Guayas killed his wife and then deliberately drowned rather than being captured by the Spanish conquistadors. Some historians claim the name of the city comes comes from the words ‘Hua’ or land, and ‘Illa’ meaning beautiful prairie and ‘Quilca, ’ one of the Guyas River’s tributaries where the Quilca tribe lived until being wiped out in the 17th century. So Guayaquil literally means ‘the land like a beautiful prairie on the land of the Quilcas.’ There may be doubt about the origin of its name but there is no doubt that the first settlement here was established on the lowlands around 1534 but moved to the Santa Ana hill in 1547. ...... (follow the instructions below for accessing the rest of this article).
This article is featured in the app "GPSmyCity: Walks in 1K+ Cities" on iTunes App Store and Google Play. You can download the app to your mobile device to read the article offline and create a self-guided walking tour to visit the attractions featured in this article. The app turns your mobile device into a personal tour guide and it works offline, so no data plan is needed when traveling abroad.