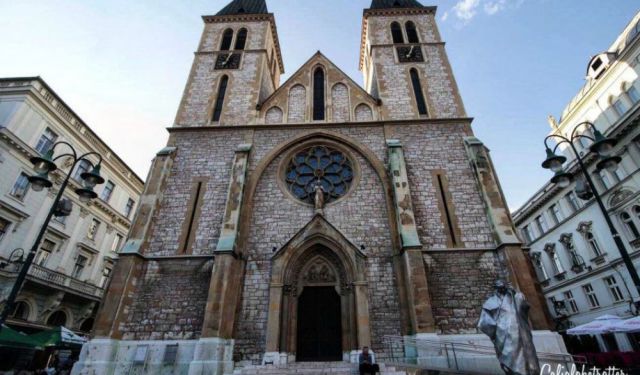 If you had asked me before our trip, “What do you know about Sarajevo?” I would have replied, “It was the city that the Austrian Archduke Franz Ferdinand had been assassinated in in 1914, the powder keg which began the First World War. Beyond that, I couldn’t tell you much.

When I first told family in 2015 we were trekking into Bosnia-Herzegovina for a day trip to Mostar, their eyes got wide and their first question was “Is it safe?” I don’t blame them for asking that. During the 90s, Bosnia had a bad reputation for being one of the most dangerous places in the world and my parents likely watched images on the news of the horrors that took place here. Yet, despite their concerns, we did our research and went for it. And we wanted more.

While scrolling on Pinterest as one of my favorite past time hobbies, I came upon a few posts about Sarajevo which piqued my curiosity. So when we were planning our two-week Balkan honeymoon (stay tuned for the full itinerary), we had planned to stop in Jajce and Sarajevo. Unfortunately, the former we had to skip as the infrastructure in Bosnia is practically non-existent and took us much longer to arrive in Sarajevo than we had intended. ...... (follow the instructions below for accessing the rest of this article).
This article is featured in the app "GPSmyCity: Walks in 1K+ Cities" on iTunes App Store and Google Play. You can download the app to your mobile device to read the article offline and create a self-guided walking tour to visit the attractions featured in this article. The app turns your mobile device into a personal tour guide and it works offline, so no data plan is needed when traveling abroad.