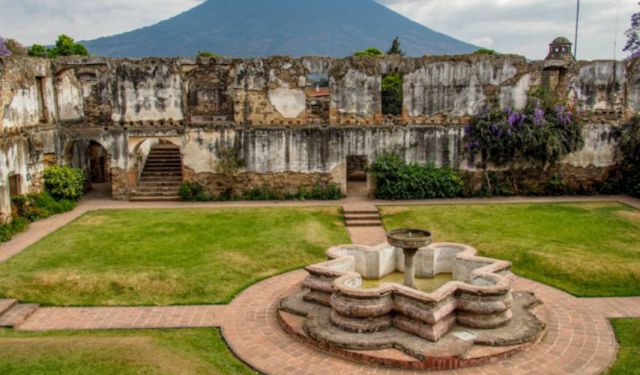 Antigua, located in the central highlands of Guatemala, was settled as the third capital of Guatemala in 1543 by Spanish conquistadors after indigenous uprisings took place in the first capital and after a volcano destroyed the second capital over a 20 year time period. Upon suffering from multiple earthquakes and severe destruction in 1773, the capital was ordered to move to Guatemala City by the Spanish Crown.

During its time as capital, Antigua became home to many religious orders that constructed several churches and convents near the main square and parks. As a result of the earthquakes, the colonial city, now a UNESCO World Heritage Site, features many ruins as well. Famous for its Spanish Baroque influenced architecture, Antigua is a wonderful place to visit in Guatemala.

Next to every park, of course, is a church. I was in Antigua during Easter and many locals, tourists, and vendors enjoyed the parks and activities in the surrounding squares.

Parque Central is surrounded by magnificent colonial structures, restaurants, and artisan markets. Tourists shop from local vendors while locals get their shoes shined in the shade of the surrounding buildings’ colonnades. Most of the Easter processions pass by this central location, so without knowing the parade schedules, it is easy to rest on the park benches and wait for the spectacle. ...... (follow the instructions below for accessing the rest of this article).
This article is featured in the app "GPSmyCity: Walks in 1K+ Cities" on iTunes App Store and Google Play. You can download the app to your mobile device to read the article offline and create a self-guided walking tour to visit the attractions featured in this article. The app turns your mobile device into a personal tour guide and it works offline, so no data plan is needed when traveling abroad.