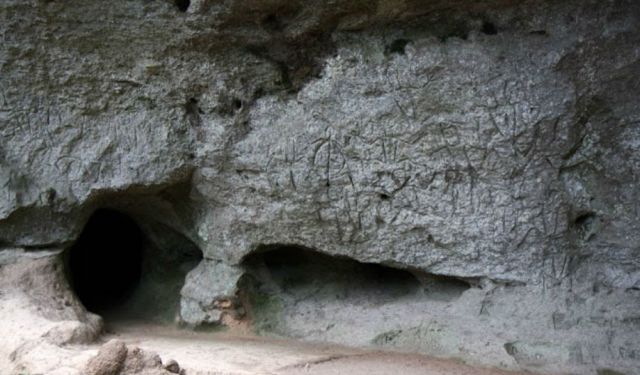 Angono, a municipality in the province of Rizal, is home to a bevy of artists...from the millennia-ago-then to the here-and-now.

The artists from millennia ago drew, or rather, engraved on rock and their artworks can be found at Binangonan (it is officially part of the municipality of Binangonan but access roads are through Angono). The Angono-Binangonan Petroglyphs is said to be the Philippines' oldest artworks, dating to 3000 BC. These 127 figures carved on a rock shelter were discovered in 1965 by Carlos "Botong" Francisco. After the discovery, a research team also discovered tools and earthenware. The tools and earthenware are now housed at the National Museum in Manila.

The museum guide is very enthusiastic in sharing information about the site and is very open to questions. He laments though that the tools and earthenware should be housed at the museum at the site, or at least a replica of it. (Sadly, he himself hasn't seen those.)

I am glad the government has taken steps to help protect these petroglyphs. A view deck has been constructed so visitors can view the ancient artworks from afar (thus protect the site from vandals; a security guard is also stationed at the site). ...... (follow the instructions below for accessing the rest of this article).
This article is featured in the app "GPSmyCity: Walks in 1K+ Cities" on iTunes App Store and Google Play. You can download the app to your mobile device to read the article offline and create a self-guided walking tour to visit the attractions featured in this article. The app turns your mobile device into a personal tour guide and it works offline, so no data plan is needed when traveling abroad.