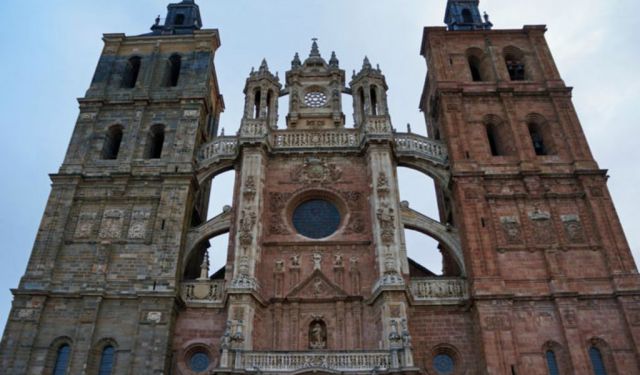 Astorga is an interesting town and I was happy to stop here for a sightseeing session despite the cold and rain. This was one of the places I did wish I had an umbrella but in lieu of that, I had a nap while I waited for the rain to stop. Naps are good. Especially on rainy days. Rain or no rain, though, Astorga is worth a wander around. But granted, the cold rain did stop me from seeing everything – for example, I totally missed seeing the ancient city walls.

Astorga was founded in 14BC as a Roman city. By the 11th century, it became a major stop on the Camino Frances and by the 15thcentury, construction began on the city’s cathedral. Astorga is also considered to be the European birthplace of chocolate (cacao bean brought to Spain by everyone’s favorite “explorer”, Hernán Cortés) and today, Astorga chocolate is still famous in the region.

It is 17th century and its most interesting feature is the bells in the middle tower. Make sure you take a look on the quarter/half/full hour as you’ll be treated to a little show. ...... (follow the instructions below for accessing the rest of this article).
This article is featured in the app "GPSmyCity: Walks in 1K+ Cities" on iTunes App Store and Google Play. You can download the app to your mobile device to read the article offline and create a self-guided walking tour to visit the attractions featured in this article. The app turns your mobile device into a personal tour guide and it works offline, so no data plan is needed when traveling abroad.