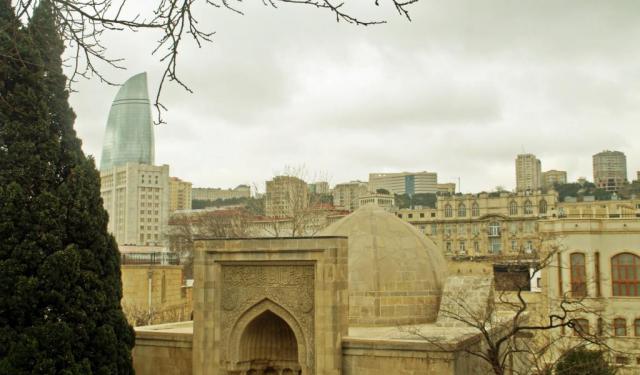 Baku: The Modernized Capital of Azerbaijan, Baku, Azerbaijan (B)

It was 5 AM, when I reached Azerbaijanian ground. I had spent the entire flight sleeping very tightly after staying awake for two days, so I didn’t even realize that we had landed, until a guy woke me up just as everyone was getting off the flight. Because it was so early and I was still extremely tired, I decided to camp out in the airport for a few hours, before finally catching a bus into Baku at 8 AM. I still had six hours to wait for check in time at the hostel, so I decided to spend that time by exploring the city a bit. From where the airport bus dropped me off, I walked a few hundred meters down to the ‘Bulvar’, a wide boulevard along the shores of the Caspian Sea. This was a great way to start the sightseeing, as I could see the entire skyline from there, most noteworthy the three characteristic flameshaped towers!

I was starving after not eating since the pizza at the Coffee House in Moscow, so I went to the busy Memmedemin Resulzade street, where I found another coffee house and had another pizza. No such thing as creativeness when it comes to food for me, haha! But I did try a white hot chocolate for the first time in my life, and it was delicious and my first of many of those! ...... (follow the instructions below for accessing the rest of this article).
This article is featured in the app "GPSmyCity: Walks in 1K+ Cities" on iTunes App Store and Google Play. You can download the app to your mobile device to read the article offline and create a self-guided walking tour to visit the attractions featured in this article. The app turns your mobile device into a personal tour guide and it works offline, so no data plan is needed when traveling abroad.