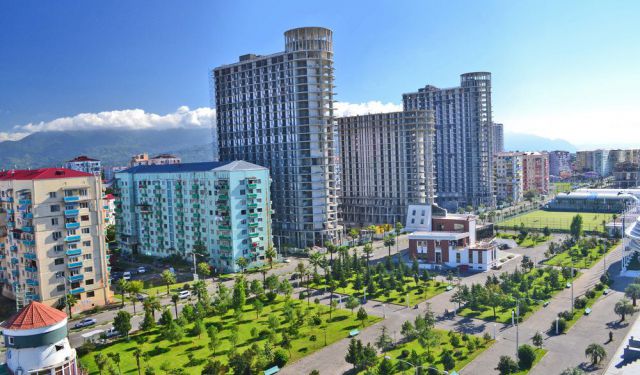 Sometimes life is unfair and we are unlucky. The same thing could be said about the Caucasus region which has just about anything to become another great tourist destination, however it is so little known in the world. Such diversity of landscapes and architecture packed in such a small area is usually not very common. The country of Georgia with its cities Tbilisi and Batumi seems to be the perfect example. These cities are so close to each other but they are completely different. It only takes a couple of hours to drive from Tbilisi to Batumi and when you reach Batumi, you have the impression that you entered another country. It is also possible to take a local mini van - called marshrutka, it departs from Tbilisi very frequently, for an exceptionally low price - around 10 EUR or 13 USD but the journey is about 6 hours. There is also an overnight train that departures from Yerevan in Armenia via Tbilisi, this is the longest way but it has its charm.

Before traveling to Batumi, I spent the night in a hotel in Bakuriani, which is a Georgian ski resort. It was October, so it was pretty cool, around 10 degrees Celsius. The trees had started to turn red and it was a bit foggy. The drive to Batumi took around 5 hours, and the way the climate and the countryside was changing was amazing. From autumn, red and yellow colors to banana trees and exotic plants in a couple of hours. However, along the way, the beautiful landscape was spoiled here and there by terribly ugly and crumbling soviet-era blocks and abandoned factories taken over by nature. By the time we got closer to Batumi, the weather had changed completely. The sky was blue, the sun was shining and the outline of Batumi 'cityscape' emerged. In contrast to the gloomy soviet buildings we had passed by, it looked even more amazingly beautiful and modern. ...... (follow the instructions below for accessing the rest of this article).
This article is featured in the app "GPSmyCity: Walks in 1K+ Cities" on iTunes App Store and Google Play. You can download the app to your mobile device to read the article offline and create a self-guided walking tour to visit the attractions featured in this article. The app turns your mobile device into a personal tour guide and it works offline, so no data plan is needed when traveling abroad.