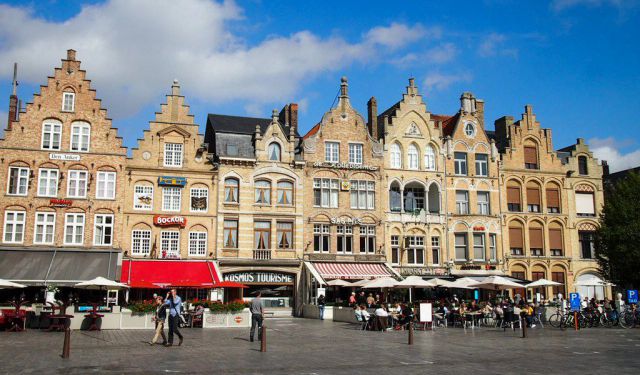 Belgium Under the Radar – Ypres, Ypres, Belgium (B)

Its known history begins as early as the first century BC, when Ypres was raided by the Romans. About 1,200 years later, in the 12th century AD, the city had grown into the third most prosperous city in the County of Flanders, after Bruges and Ghent. The main industry was the manufacturing and trading of cloth. Textile from Ypres was in high demand at that time and could be found almost everywhere in the then known world, even as far as Novgorod in Russia. The cloth exchange was created and the enormous cloth hall, belfry and cathedral were built. The city remained extremely wealthy until the beginning of the 14th century, when an epidemic killed a large part of the population. Wars and battles followed and Ypres quickly lost its (economic) power.

It wasn’t until early in the 20th century that Ypres played a part in the world’s history again. During World War One the city and surrounding fields were in the middle of the western front line between the Germans and the Allied armies. Total destruction was the result. A poem written by the Canadian Lieutenant Colonel John McCrae made Flanders Fields and Ypres world famous. ...... (follow the instructions below for accessing the rest of this article).
This article is featured in the app "GPSmyCity: Walks in 1K+ Cities" on iTunes App Store and Google Play. You can download the app to your mobile device to read the article offline and create a self-guided walking tour to visit the attractions featured in this article. The app turns your mobile device into a personal tour guide and it works offline, so no data plan is needed when traveling abroad.