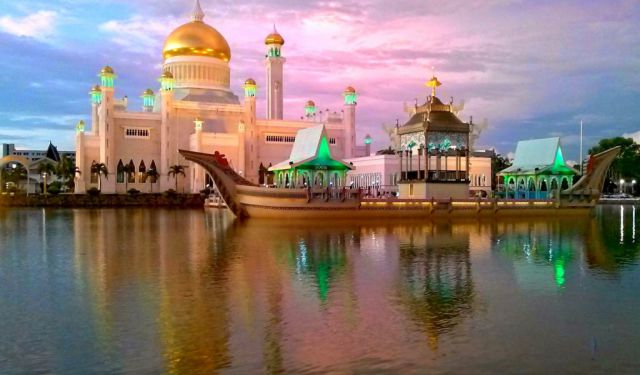 This is another weekend trip I recently had during the month of May-2014. We had an exciting connecting flight to Bandar Seri Begawan (read here) via KLIA2.

Inside the aircraft, I was fortunate to seat beside a local Bruneian; and I learn some trivia about the Kingdom of Brunei. The nation has its own cattle station in Australia that is larger than Brunei itself. The 5986-sq-km station in Willaroo, in the Northern Territory, which supplies Brunei with beef and other meat products. The live cattle are brought direct to Brunei from Darwin and slaughtered according to Halal practices.

While landing, he pointed me the residence of the Sultan of Brunei, its that large compound consisting of white structures, surrounded by the trees.

Upon arriving the capital city of Brunei, it was impressive to see the well develop highways, it felt like we were in Singapore.

Our hotel provided a free airport pickup, and our driver was so accommodating and told us several stories.

Main product of Brunei is fuel. Hence, their fuel costs: 0.53 BND per liter of Gasoline, and Diesel costs 0.30 per liter! Which is cheaper than a liter of bottled water (1 BND). ...... (follow the instructions below for accessing the rest of this article).
This article is featured in the app "GPSmyCity: Walks in 1K+ Cities" on iTunes App Store and Google Play. You can download the app to your mobile device to read the article offline and create a self-guided walking tour to visit the attractions featured in this article. The app turns your mobile device into a personal tour guide and it works offline, so no data plan is needed when traveling abroad.