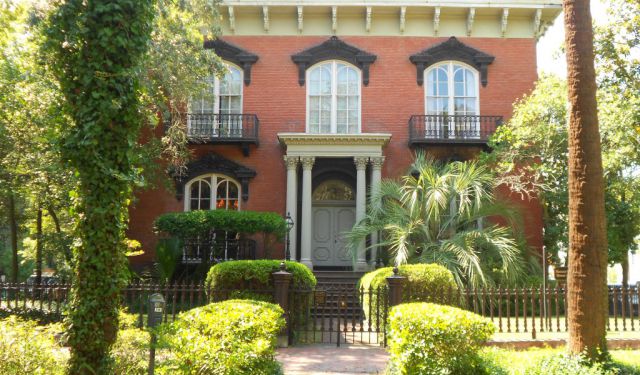 This section will cover the homes and other important buildings on and around Chatham, Monterey, Calhoun and Whitefield Squares.

At Chatham Square go East on W. Taylor Street or W. Gordon Street. At Monterey Square you come to perhaps the most amous, or most infamous home in Savannah, the Mercer-Williams House. The Italianate mansion is best known for its connection to the Midnight in the Garden of Good and Evil. It was the home of Jim Williams, who was accused of shooting Danny Hansford in the home’s study.

Further along you will encounter the Temple Mickve Israel, the only Gothic revival synagogue in America; and The Massie Heritage Center, originally a school for the poor established in the 1840s.

Known locally as Barnard Square, this plaza, laid out in 1847, was named in 1851 for the 1st Earl of Chatham, William Pitt, known as the “Great Commoner”. Although he never visited Savannah, Chatham County is named in his honor in recognition of his support for the colony of Georgia. The area is marked by a number of lovely Greek revival homes and row houses built in the 1850s during Savannah’s “golden age”. ...... (follow the instructions below for accessing the rest of this article).
This article is featured in the app "GPSmyCity: Walks in 1K+ Cities" on iTunes App Store and Google Play. You can download the app to your mobile device to read the article offline and create a self-guided walking tour to visit the attractions featured in this article. The app turns your mobile device into a personal tour guide and it works offline, so no data plan is needed when traveling abroad.