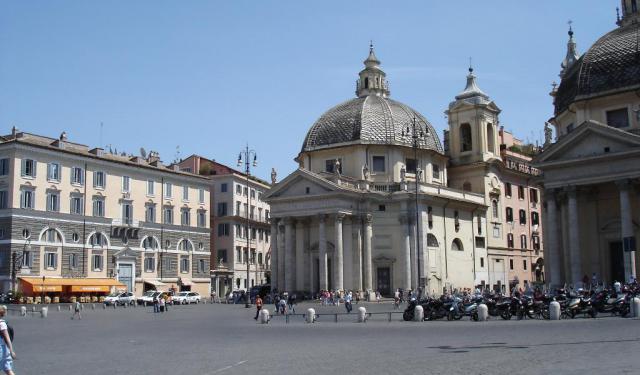 Churches in Rome, Rome, Italy (B)

The churches in Rome are beautiful historic places, some of them built over ancient temples. Most of them are large and imposing, but there are also some small, intimate constructions, too. And, despite having this list of 45 churches in Rome, I only covered the most interesting and/or most famous ones on this page of the Rome travel guide.

- visiting information including opening times, ticket prices, address and map location, telephone if available, and details on how to get there using public transport.

Basilica di San Giovanni in Laterano, the cathedral of the diocese in Rome was founded by Emperor Constantine in the 4th century. Until 1309, this was the main papal residence and the popes were actually crowned here up until the 19th century.

The renovation from the 1650s explains the Bombastic baroque style that is still present today. You can notice it both in the gestures and in the attitudes of the oversized saints.

Not far from here, there is a construction called Scala Santa. Brought from Jerusalem by Hellen, the mother of Emperor Constantine, these stairs are said to be the ones where Jesus was convicted. Nowadays, believers climb the Scala Santa on their knees while they ardently pray. ...... (follow the instructions below for accessing the rest of this article).
Image Courtesy of Russell Yarwood.
This article is featured in the app "GPSmyCity: Walks in 1K+ Cities" on iTunes App Store and Google Play. You can download the app to your mobile device to read the article offline and create a self-guided walking tour to visit the attractions featured in this article. The app turns your mobile device into a personal tour guide and it works offline, so no data plan is needed when traveling abroad.