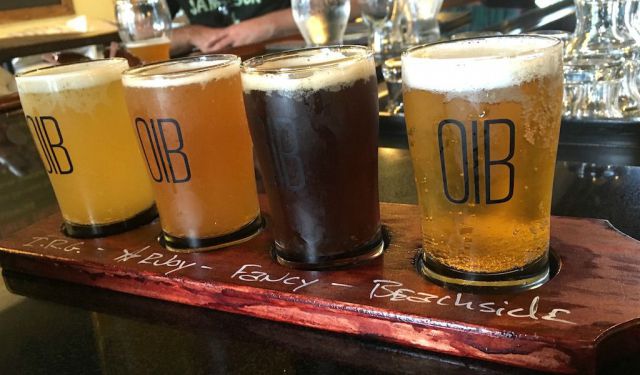 Craft Beer along the Treasure Coast of Florida, Sebastian, Florida (B)

A few years ago when we first started coming to the Treasure Coast, I tossed a Hail Mary out into the internet to search for craft beer near Sebastian Florida. It was just a whim and I never expected anything to show up, so I was surprised to see Pareidolia Brewing Company in a strip mall down the street. That was in 2015. Now there are two breweries in Sebastian and three breweries fifteen miles down the coast in Vero Beach.

The craft beer movement was slow to reach Florida but it is finally taking off. According to the Brewers Association, in 2017 there were 243 craft breweries in Florida, up from 151 in 2015 when we first arrived, and more than twice as many as there were in 2014. We’ve also noticed that more local bars and restaurants have increasing selections of Florida craft beers on tap.

While we were touring around the breweries in Sebastian and Vero Beach, we met many people making the same loop that were just as excited to finally be able to do a craft brew tour locally. Three Treasure Coast tourism agencies recently came together to form the Treasure Coast Wine and Ale Trail. The trail currently lists nine breweries from Sebastian south to Port St. Lucie. (download the Treasure Coast Wine and Ale Trail map here) On our next trip we’ll have to venture further south down the coast to explore the breweries in Fort Pierce and Port St. Lucie. This spring, we passed a few fun days sampling these five breweries in Sebastian and Vero Beach. ...... (follow the instructions below for accessing the rest of this article).
This article is featured in the app "GPSmyCity: Walks in 1K+ Cities" on iTunes App Store and Google Play. You can download the app to your mobile device to read the article offline and create a self-guided walking tour to visit the attractions featured in this article. The app turns your mobile device into a personal tour guide and it works offline, so no data plan is needed when traveling abroad.