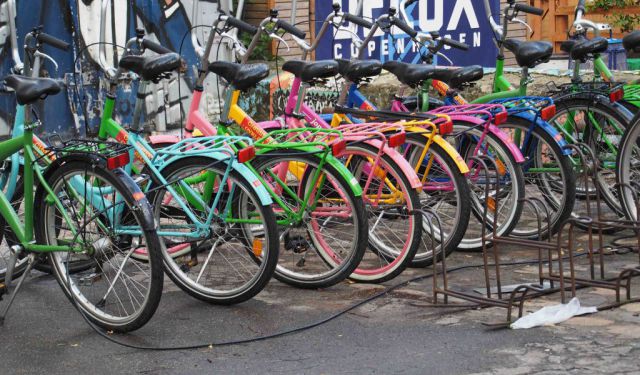 The forecast called for one decent weather day. It was supposed to be today, so we rented bikes from the hotel as how could we come to Copenhagen and not ride bikes given it has been voted Best Bicycle City in the World for two consecutive years. Well, we started out on our bikes beneath black skies in a light drizzle. At first we wondered what we got ourselves into as we precariously positioned ourselves to jump on bikes made for tall Danes. Suman had to get her pedals in a perfect position, while I went with a skateboard start pushing my bike forward with one foot.

Fortunately the dedicated bike lanes are raised just slightly above street level and are the width of a sidewalk. In addition, the traffic lights include lights for cars, bikes, and pedestrians, so we had our own traffic flow. With our familiarization of the city yesterday, we really didn’t have to stop to look at the map often, only at each tourist attraction.

We started the day early, crossed the canal and visited the island of Christianshavn and more specifically Christiania, an area established by squatters in 1971. It’s a commune of collective business, workshops and communal living. Colorful buildings peppered the cobblestone streets. The area was virtually deserted Sunday morning though I suspect Saturday night was rather busy, especially with its green light district full of marijuana selling huts. No photos were allowed of the leafy stalls which is too bad because it was so eclectic and fun to see. Its own version of the “Stadens Museum of Kunst” located in a run down warehouse wasn’t open. It would have been fun to see the local art, though much of it appeared to be painted all over the buildings. ...... (follow the instructions below for accessing the rest of this article).
This article is featured in the app "GPSmyCity: Walks in 1K+ Cities" on iTunes App Store and Google Play. You can download the app to your mobile device to read the article offline and create a self-guided walking tour to visit the attractions featured in this article. The app turns your mobile device into a personal tour guide and it works offline, so no data plan is needed when traveling abroad.