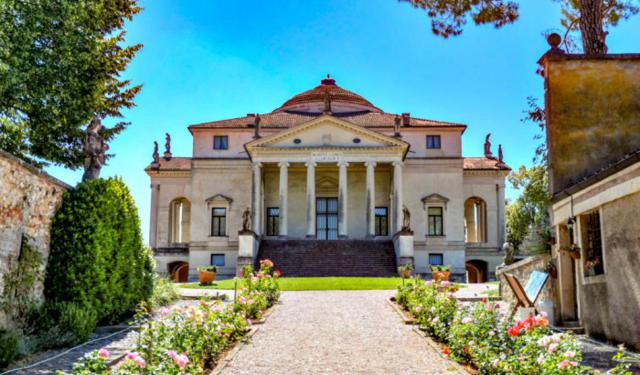 Vicenza is an hour drive from Venice and worth touring if time permits. The city in a UNESCO World Heritage Site and features many works of Andrea Palladio, a 16th Century Renaissance architect who defined the Palladian Style. Palladio’s buildings are marked with bi-lingual signs, thus it is easy to tour the town in search of his architecture. Two places designed by Palladio that we visited were the Olympic Theater and Villa Capra (la Rotunda).

I highly recommend taking a tour of the Olympic Theater. I found the interior to be spectacular and think it would be incredible to see a show here despite the wood bench seats topped with red cushions on performance nights.

Behind the stage curtains is an intricately painted set of wood and stucco that looks like Vicenza’s main street named for Palladio. The set is built in a perspective to look very long, but it isn’t. While actors and actresses could walk through the set behind the stage in a play, it is so old and fragile that it is not put into use. Regardless, it is one of the coolest theaters I have ever seen. ...... (follow the instructions below for accessing the rest of this article).
This article is featured in the app "GPSmyCity: Walks in 1K+ Cities" on iTunes App Store and Google Play. You can download the app to your mobile device to read the article offline and create a self-guided walking tour to visit the attractions featured in this article. The app turns your mobile device into a personal tour guide and it works offline, so no data plan is needed when traveling abroad.