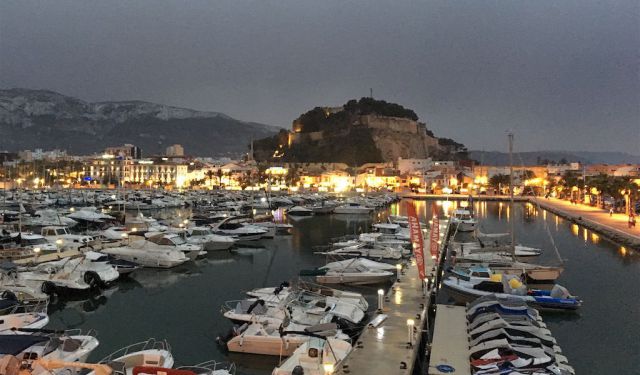 Denia, Spain: Food Crawling in a City of Gastronomy, Denia, Spain (B)

The seaside town of Dénia sits on a piece of Spain’s Costa Blanca jutting out into the Mediterranean Sea just over 100 km south of Valencia. It may be a charming beach resort, but perhaps the best reason to visit Dénia is for the food. The tagline on Dénia’s tourism website is City of Gastronomy for good reason. In 2015 Dénia was chosen as a UNESCO Creative City of Gastronomy. I bet you didn’t know that was even a thing; we sure didn’t.

This UNESCO designation focuses on a city’s culinary heritage and it’s commitment to creative plans to sustainably preserve that heritage for the future. In Dénia, that culinary heritage is rooted in the traditional local fishing industry and the surrounding rice fields. Dénia is known for its rice dishes and its great seafood—especially red prawns and dried octopus.

When we first came to Spain, we stopped in Dénia for a day on our way to Valencia. We met a local who lived in Valencia but said he spent his weekends in Dénia because the food was so good. With so little time we didn’t get a chance to try many restaurants, so we vowed to return. Unfortunately, that vow was shuffled to the bottom of a pile of things to do while we settled into Valencia. Now, two years later we finally remembered that promise to ourselves when a friend mentioned the bus to Dénia. We immediately scheduled a trip for that weekend. ...... (follow the instructions below for accessing the rest of this article).
This article is featured in the app "GPSmyCity: Walks in 1K+ Cities" on iTunes App Store and Google Play. You can download the app to your mobile device to read the article offline and create a self-guided walking tour to visit the attractions featured in this article. The app turns your mobile device into a personal tour guide and it works offline, so no data plan is needed when traveling abroad.